Jean Paul de Marigny has set his sights on winning silverware in the next 12 months as he shook the caretaker tag from his shoulders following his appointment as head coach of Western Sydney Wanderers until June 2021.

On a wet and cold Tuesday morning the Wanderers players zoomed into the carpark for their first team meeting with Jean Paul de Marigny as head coach.

The Wanderers believe this is the man to get them out of a rut that has seen them finish sixth or below in the last three seasons. They could quite possibly end up there again in August, sitting in eighth spot with five games to play. 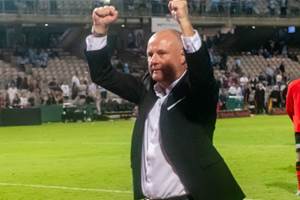 Jean-Paul de Marigny will remain at the helm of Western Sydney until the end of the next A-League season and is eyeing silverware during that time frame.

Today, the new man in charge set himself and his team the lofty goal of winning the FFA Cup or league title within the next year.

"Like everything else, my belief is that this club is a big club, the biggest club in the league," said de Marigny. "My definition of a big club is a club that wins trophies.

"So, the challenge for us is to make sure that when comes season end, we are challenging to win trophies."

"That's why I get up. Everyday, we need success we want success and that' what we'll be chasing."

Under the financial constraints placed on the league in the next few months as a result of COVID-19; taking a struggling team anchored by issues regarding on-field philosophy and motivation to being title contenders is a seriously ambitious goal for a manager about to begin his managerial career in the A-League.

The current uncertainty surrounding the next 18 months of the league means the club won't gamble on a long-term deal for a manager, but de Marigny isn't taking this as another audition to prove himself.

"I've never in my career chased for anything," he said. "The first thing I chase for is performance from the team, giving them the good environment to maximise their ability.

"You have a group of 20 odd players, I think one of my strengths is managing players.

"My knowledge of the tactical part of the game is a very strong part of my ability and belief in what I can bring to the football club."

"In terms of the short term our main challenge is to make sure we execute properly."

Execution is a problem that has plagued the Wanderers. They've scored 26 goals in 21 games this season and will hope new signing Simon Cox can add to his two-goal tally this term.

Despite issues on the field which led to the sacking of Markus Babbel in February, their season is headlined by the mergence of young Western Sydney talent. The role of the manager of the Western Sydney Wanderers almost by default requires them to recognise that part of the areas football identity.

De Marigny says he won't shy away from utilising the youth development arm of the Wanderers when incorporating them into what he believes can be a trophy winning team.

"I believe we can do both," he said. "We've been able to give young players their debuts, my satisfaction out of coaching is seeing players progress and achieve what I achieved as a player and beyond and bigger.

"I believe it's part of a development of young players, having success in teams, the better the pros are the more chances the young player can learn his trade and challenge for positions.

"Recently we achieved that under Kevin Muscat at Melbourne Victory. We won the league and also promoted a lot of players who are playing abroad now."