Socceroo Thomas Deng says players train harder in the J1 League than they do in the A-League, as he adapts to football in Japan.

Deng swapped Melboune Victory for Urawa Red Diamonds at the end of January.

The defender admits it has been a steep learning curve after missing most of pre-season with his new club.

The J1 League played one round of the new season in February before it was called off because of the Coronavirus.

Deng said the shutdown of the season may indirectly have helped him by giving him more to learn and get used to his new surroundings.

"At first it [training] was kind of a shock," the 23-year-old told The Socceroos podcast.

"I came in and went to the training camp in Okinawa. I was there for about three days, I missed the whole month.

"Basically we just came back and went straight into the league, so for me it was quite tough to try and understand the tactics side and what the coaches and players wanted from me.

"So in a way this virus kind of helped me in giving me extra time in understanding what my role is, also understanding what the coaches and players want from me. Now I'm kind of getting used to everything, also the tempo. I'm just getting fitter.

"The training loads are a bit harder here to the A-League, so it took a few weeks to get used to that."

Deng, who captained the Olyroos to Olympic qualifcation, spent five seasons with Melbourne Victory before his move overseas.

He said Urawa have tried to make his transition to Japan as easy as possible.

"They've made everything pretty easy, setting me up here," Deng said.

"I'm pretty comfortable with life here in Japan. I've got a translator and a pretty nice apartment here it Saitama, it's five minutes from the training centre. I've got everything close by that I need."

Key Olyroos get Tokyo lifeline, but what happens to banned trio? 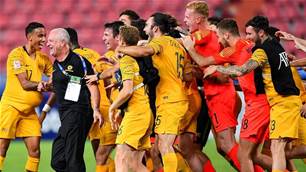 'Can we actually do this?' to 'let's go make Australian history': The Olyroos journey