When he took the call and was told two of his players, including starting midfielder Anthony Caceres, had come down with gastro, his fears were proven right.

Yet despite the late setback, Corica's team went on to secure a vital point against top-of-the-table Western United at a rain-soaked Netstrata Jubilee Stadium on Saturday.

Max Burgess, shuffled into a new role in midfield due to Caceres' absence, scored against his former club to cancel out Steven Ugarkovic's opener and secure a share of the spoils.

The Sky Blues even survived late VAR drama when referee Shaun Evans awarded the visitors a penalty in second-half stoppage time before overturning his decision.

It was a dramatic day in many ways for Corica but an important one to come through as he expects important players back for next weekend's clash with Wellington Phoenix.

While Paulo Retre's fifth yellow card of the season against Western means he'll be suspended for the Phoenix game, New Zealand forward Kosta Barbarouses and fringe Socceroo Mustafa Amini could both return from injury.

"We're getting used to the conditions whether it's COVID, gastro or whatever these days so we've just got to go with the flow and they will be back next week," Corica said.

"I'm sure Kosta will be back next week as well for his first game of the season and we're hoping Musti will be back as well."

The Sky Blues coach was also full of praise for Burgess, who notched his second goal of the campaign despite being forced into an unfamiliar role.

"I thought he played really well as a number six. He got on the ball, did all the right things, kept it for us," Corica said.

"Defensively, he was good as well, and I'm pleased for him as well to get the goal.

"I thought he took it really well. Finished it off. 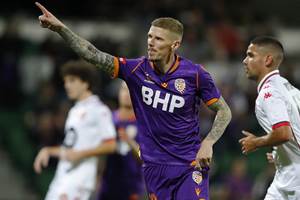 Perth Glory will celebrate club legend Andy Keogh's 150th game with a number of key players back in the line-up for their A-League Men clash with Central Coast. 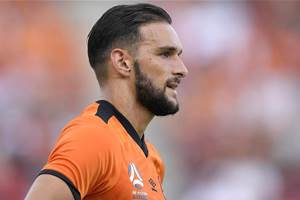 Brisbane defender Jack Hingert will be doing all he can to prevent ex-teammate and Macarthur winger Tommy Oar spoiling his 200th A-League Men's appearance for the Roar.