It’s a good thing that John Aloisi is about as humble a bloke as you’d ever meet. If he wasn’t, he could easily be the biggest braggart in Australian sport.

It’s a good thing that John Aloisi is about as humble a bloke as you’d ever meet. If he wasn’t, he could easily be the biggest braggart in Australian sport. 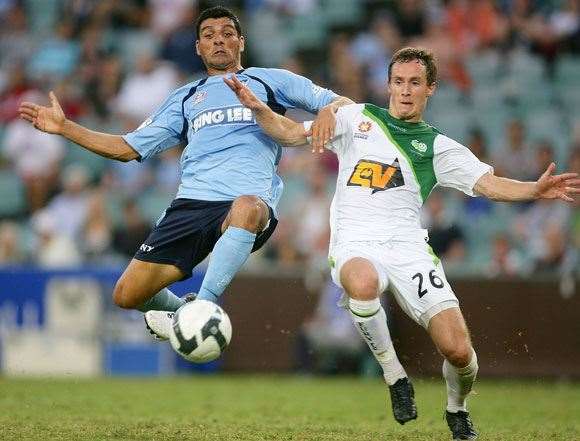 Forever immortalised for that penalty against Uruguay which sent Australia to its first World Cup in 32 years, there’s plenty of other achievements the new Melbourne Heart striker can bang on about. There’s his glittering 19-year playing career that’s seen him become the only Aussie footballer to grace the three biggest leagues in Europe – the English Premier League, Italian Serie A and Spain’s La Liga. There’s the World Cup appearance in 2006, his solo goal against Japan, and a haul of 27 goals from 55 internationals for the Socceroos – among them the four he scored at the 2005 FIFA Confederations Cup in Germany to win the Bronze Shoe. Who better to review Australia’s World Cup campaign than the man who got us there in ’06? Inside Sport also had a “heart-to-heart” with Aloisi about the new A-League season.

How did you cope watching the World Cup from this side of the fence?

It’s always different watching a game you’d love to be playing in, but I realised a few years ago that I wouldn’t be going

to this World Cup, so I just wanted to enjoy it as a supporter. It was the first time I’d got to watch Australia at a World Cup because, of course, last time I was there, and in 1974 I hadn’t been born. I really enjoyed it and thought the boys

Opinion’s been divided on the overall spectacle of the tournament. What was your assessment of South Africa 2010?

It was a good tournament. There were quite a few upsets. To see Germany play the way they did – that was exciting football. Five years ago they were a pretty boring team to watch, but now they’re very exciting, fast and skilful. I was also excited to see Spain win. I played there for six years, so I love Spanish football and the people.

You would’ve been happy not to contend with the Jabulani?

Yeah (laughs). There were complaints last time (in 2006) about the ball and it did take a while to get used to it. You

could tell this time that there were players who were over-hitting their passes and it’s a pity FIFA ended up bringing out a new ball for a World Cup. They should just stick to the normal balls they play with all the time. People don’t realise it makes a big difference when the ball is different. I don’t know why FIFA changes these things. They should concentrate on helping the referees out. A lot of the talking points were about bad refereeing decisions. I’m not saying it was the referees’ fault, but most of the games were decided on bad decisions.