Australian striker Mitchell Duke put his injury troubles firmly behind him by scoring his first goal in over a year in Shimizu S-Pulse’s 2-0 win on Saturday night.

The 26-year-old continued his comeback with the stoppage time sealer away to Kashiwa Reysol, securing Shimizu’s third win of the J-League season.

Duke came off the bench for the third straight match late in the contest and applied a cool one-on-one finish to wrap up three points.

Capped four times by the Socceroos, the former Central Coast Mariners man has endured a frustrating spell on the sidelines since making 29 appearances in his first season in Japan.

The strong centre-forward played 90 minutes for the first time in almost a year last month and will hope for an extended run in the first-team as he seeks to make the most of the final six months of his contract.

Another former Mariners star, Oliver Bozanic, started and played over an hour of Ventforet Kofu’s 1-1 draw away to Kawasaki Frontale.

Elsewhere in Asia, Jeju United defender Aleksandar Jovanovic notched 90 minutes in a 1-1 draw in the K-League while Dario Vidosic couldn’t prevent a 2-1 loss for Seongnam in Korea’s second division. 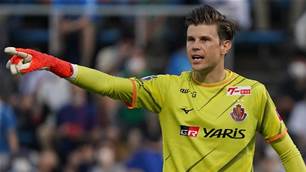