Western Sydney will attempt their A-League rebuild without captain Mitch Duke, who has secured a lucrative deal in the Middle East.

Western Sydney captain Mitch Duke has departed the A-League club to play in the Middle East.

The Wanderers had been desperate to keep hold of their in-form striker and had offered him a contract extension, but ultimately lost out to a significant financial offer - believed to be from Saudi club Al-Taawoun.

"The offer from the Wanderers made it very difficult for me to make this decision, but I have been presented an amazing opportunity in Asia that is in the best interests of my family and it is one that I couldn't turn down," Duke said.

Duke, 29, joined the Wanderers in January 2019 and was named captain ahead of the current season, before scoring 14 goals in a stand-out campaign.

The Socceroo's departure is a blow to Western Sydney's bid to rebuild under new coach Jean-Paul de Marigny, with the Wanderers keen to snap a three-season run of missing the A-League finals.

"We put in a very strong offer to keep Mitch at the club despite the uncertainty that still surrounds the salary cap for next season," Wanderers chief executive John Tsatsimas said.

"Mitch was a player that we knew we wanted to represent the club moving forward, however we understand the current global situation and his decision to pursue what is a very good opportunity for him and his family overseas." 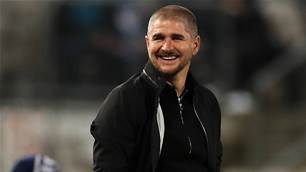