Milan Duric may be the Central Coast Mariners' best performer after his goal earned a point in the F3 Derby against Newcastle Jets, but he's also their biggest critic.

Duric scored his second goal in two matches for the club after opening the scoring against Western Sydney Wanderers last week, with a rocketing volley from a tight angle on the fourth minute.

Central Coast couldn't hold on to their lead against a resurgent Jets in the second half however, with Dimi Petratos scoring the equaliser on the second time of asking from the spot.

A tired-looking Duric couldn't expend much enthusiasm from the classy finish, only admonishing his team's inability to close out matches.

"It opened very good, we made whatever we wanted and we went up 1-0, but we had no luck tonight," he said.

"We hit the crossbar two times and in the end there were too many mistakes, a loss of concentration, and we paid the price.

"It was a good goal but I don't feel very good, because we played well last week and we lost and now we've drawn."

As for how he's loving life in Gosford? Well, let's just say he wasn't in a great mood.

"I've had no time to spend in Central Coast, any time I have off I spend with my wife and son.

"We haven't even had time to go to the beach, but I spend time at the park with him playing football."

What is clear, despite his rather depressed-sounding post match comments, is that the Mariners have an excellent attacking signing in the 32-year-old Serbian.

One of the weapons he replaced, Matt Millar, was in a better mood though, despite copping abuse and a few hip and shoulders for virtually the entire match.

He may have been shut out of the game to a fair degree, but Newcastle could do nothing to hinder a cool-headed Petratos.

"I expect it coming back here, but it helped motivate me to do well," Millar said.

"I seemed to get overloaded a bit, but I guess that means another guy was free so it evens out.

"After the first 45 minutes we felt we were the better team. Dimi has a lot of nerves to stand up and take that second one, he did very well to put it away in the end." 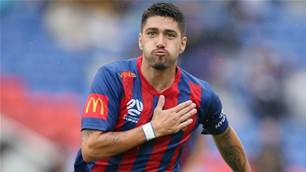 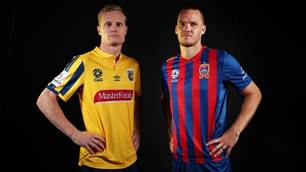