Aussie Scot Lyndon Dykes has snubbed the Socceroos to pledge his international future to his adopted new homeland, Scotland.

Dykes looked set to be the latest under the radar Aussie to join the national team set up after an impressive start to the season with Livingston in the Scottish Premiership.

Just last month the former Gold Coast-born, Canberra-bred Aussie  was telling Optus Sport of his ambition to pull on the green and gold.

"Obviously I'd love to play for Australia if I got the opportunity," he said. "And I think I could do a job for them."

But today he told the Scottish Sun, he had decided to play for Scotland if he got the chance.

“I’ve thought about it," the 24 year old striker said. "My son was born in Scotland. My parents are Scottish.

"I don’t really have any family born in Australia besides me and my sister, so I don’t see why I couldn’t play for Scotland.

“I watched them during the international break and they have a brilliant team. If I ever got the opportunity, I’d love to play for Scotland."

He added: “I’ve lived here for a few years now. My parents were born here, so I’ve got Scottish blood. I’m not someone who’s just rocked up in the country for the first time and wants to play.

“So I thought I could maybe make it a goal for myself, to try to play for Scotland.

“I think they’ve got a fighting spirit and I really hope they make the Euros now. I’d love to be a part of that, if I ever got an opportunity, of course.” 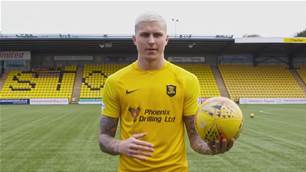