Ahead of Sunday’s A-League Grand Final against Sydney, Spanish import Diego Castro says the success he’s had with Perth Glory this season has made him feel like a kid.

‘El Maestro’ has left an indelible mark on the A-League yet again with his skill and mastery earning him his second Fox Sports Player of the season and Perth Glory a spot in the A-League decider .

Castro also finished just two points behind Roy Krishna for the Johnny Warren Medal and had he not been injured for seven games, he would’ve been awarded that accolade twice, after being honoured in  2015/16.

Speaking to FTBL ahead of Sunday’s decider Castro revealed how despite being 36, this season’s personal and team success has made him feel like  he was a youngster again.

“It’s beautiful,” he said. “I have been enjoying this season as a kid. Some part of me still plays as a kid.

“Obviously there are responsibilities when you are playing professionally but you need to come to enjoy yourself as a kid.

“If you have a look at what I went through at the beginning of the season, how I started  with an injury, I never thought I would be able to compete for these individual awards. It’s a fantastic legacy in my case.

“I never think about individual awards, I’m always thinking of the collective but I am happy and so proud and obviously it’s important to have the support of my teammates and my coaches.”

Castro credited Glory’s success – winning their first ever Premiership and making the Grand Final, – to coach Tony Popovic and added that a win on Sunday would mean everything.

“At some point he changed us,” he said. “He changed our mind set, he set up everything to try to create the best scenario for us to perform well.

"I’ve won some individual awards but I’ve never won a Championship. Winning the Premiership this year has been fantastic, and after tasting that I want to taste the Championship as well.

"We know we’ve got a big challenge against us with Sydney, especially after the way they performed but having said that we are ready to face them in the Grand Final on Sunday." 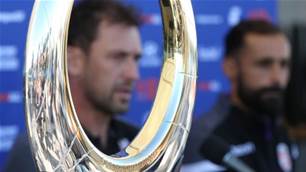