Newcastle Jets coach Ernie Merrick has been fired, 11 games into the 2019-20 A-League season.

Merrick took Newcastle to a grand final in 2017-18 but this season the Jets have won just two of their 11 matches and are sitting bottom of the table with a goal difference of -14.

"During Ernie's tenure, the club reached its first grand final in more than 10 years and we're grateful for his contribution during his two-and-a-half years in Newcastle," chief executive Lawrie McKinna said.

"However, results and performances haven't been good enough this season and a change was needed."

The Jets confirmed there had been no other changes to other coaching or football staff.

With recruits Wes Hoolahan and Abdiel Arroyo suffering injuries, the Jets have struggled to score this season.

In recent weeks, Newcastle shipped goals at a dangerous rate - conceding 17 in five games, including six to Perth Glory and four to both Melbourne City and Melbourne Victory.

On Sunday night, following the 4-0 loss to Melbourne Victory - which extended Newcastle's winless streak to five games - Merrick had said he didn't feel pressure on his position.

"I've never felt pressure really because I know I'm only a caretaker coach, so I know I'm going to go sooner or later," Merrick said post-match.

"I'm not going to change the way I coach or make any difference or go blame the players, I take a lot of the blame myself.

"And no, no, I want to do well with the team for the sake of our fans, who have been long-suffering and that's the pressure I put on myself."

The A-League's most experienced coach - involved in every season bar 2011-12 and 2012-13 - Merrick was Victory's inaugural boss from 2005 until he was sacked in March 2011, winning two championships and two premierships.

After leading the Hong Kong national team from December 2011 to October 2012, Merrick returned to the A-League with Wellington Phoenix from May 2013.

Merrick's first season in Newcastle was a revelation, leading to a one-year contract extension in April 2018 until the end of 2019-20.

But the Jets missed the finals last season - finishing seventh, before this year's horror start saw the club's owners and senior management part ways with their coach. 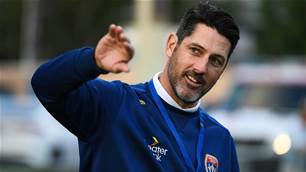 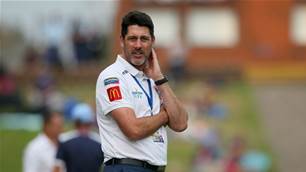