Manchester United survived a scare against Ajax to progress through to the last 16 of the Europa League on Thursday.

The English Premier League outfit won the first leg 2-0 in Amsterdam and they were expected to progress comfortably at Old Trafford.

But despite Mexican Javier Hernandez' sixth-minute strike, Sir Alex Ferguson's men were outplayed and slumped to a 2-1 home defeat.

It mattered little as they won 3-2 on aggregate, but goals from Aras Ozbiliz and Toby Alderweireld ensured a nervy finale for the hosts.

The news was not as good for fellow Premier League side Stoke City, who saw their European adventure come to an end after a 1-0 defeat at Valencia.

Stoke boss Tony Pulis named a second-string side for the trip to Spain after they lost the first leg 1-0, but the Spaniards did not have it all their own way.

Brazilian Jonas scored the only goal of the match with his 11th strike of the season on 24 minutes enough to seal their progression.

The tie finished 1-1 after regular time, with a late goal from Frantisek Rajtoral canelling out Huntelaar's eighth minute opener.

The Dutch ace scored twice more in extra time though, taking his season tally to 33 goals in all competitions, as the Germans went thorugh 4-2 on aggregate.

Last season's Europa League finalists Braga were knocked out of the competition despite winning 1-0 at Besiktas, but wins by the same scoreline was enough for Olympiakos, Athletic Bilbao, AZ Alkmaar, Atletico Madrid and Sporting Lisbon to qualify against Rubin Kazan, Lokomotiv Moscow, Anderlecht, Lazio and Legia Warsaw respectively.

Serie A high-flyers Udinese won 3-0 at PAOK Salonika to win by the same scoreline on aggregate.

Meanwhile a goalless draw in Belgium was enough to send Standard Liege through on away goals against Polish outfit Wisla Krakow.

Slovenian forward Tim Matavz bagged a double in PSV's 4-1 win over Trabzonspor that sealed a 6-2 win over the two legs, while Hannover, Twente and Athletic Bilbao won their ties after 1-0 wins over Club Brugge, Steaua Bucharest and Lokomotiv Moscow respectively.

Metalist Kharkiv scored four goals against Red Bull Salzburg for the second time in a week as they claimed an 8-1 aggregate victory.

'It was brutal getting home' - Matilda's tough return from Spain lockdown 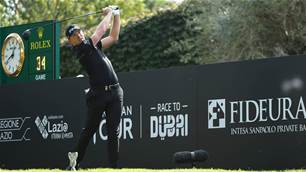