TOTTENHAM, Genk, Valencia and Rubin Kazan were among the sides to clinch their UEFA Europa League groups on Thursday.

The Premier League side were 2-0 winners against Tromso in Norway but were assured of top spot in Group K before the final whistle at the Alfheim Stadion following runners-up Anzhi Makhachkala's 1-1 draw with Sheriff.

Rubin are guaranteed a place in the knockout stage for a second successive season after a 1-1 draw with Maribor maintained their unbeaten record in Group D, while Genk's win over Dynamo Kiev in Group G put them clear at the top.

Dynamo will need to avoid defeat against Rapid Vienna in the final game to move into the next round.

Zulte Waregem's 2-1 triumph against Wigan Athletic at the DW Stadium made them favourites to join Rubin in progressing from Group D, but the Championship side and Maribor remain in with a shout.

Valencia made it four wins from four Europa League matches against Swansea City to win Group A and leave second place up for grabs, with Kuban Krasnodar's 4-0 win over St Gallen boosting their hopes.

The qualification scenarios in groups I and J have been decided after the penultimate round of fixtures, with the former seeing Lyon and Real Betis go through following a 1-0 victory for the French side against Pepe Mel's men.

In Group J, Trabzonspor and Lazio booked their progression after victories over Apollon and Legia Warsaw respectively, while already qualified Salzburg and Esbjerg continued their dominance of Group C with 1-0 and 2-1 wins against Elfsborg and Standard Liege respectively.

Ten-man PSV lost 2-0 to Group B winners Ludogorets, meaning their qualification hopes will go down to the wire, as will those of Maccabi Tel Aviv, who drew 0-0 with Apoel Nicosia, although Group F rivals Eintracht Frankfurt are safely through after beating Bordeaux 1-0 thanks to a late Martin Lanig goal.

Fiorentina dropped points for the first time in Group E, drawing 0-0 against Pacos de Ferreira, while Dnipro Dnipropetrovsk moved to within a point of the Italian side after beating Pandurii Targu Jiu 4-1 thanks to goals from four different scorers.

The fight for top spot in Group L is between AZ and PAOK with the pair recording wins over Maccabi Haifa and Shakhter Karagandy respectively. Unbeaten Sevilla are into the next round also, with Slovan Liberec and Freiburg left to battle it out for qualification from Group H. 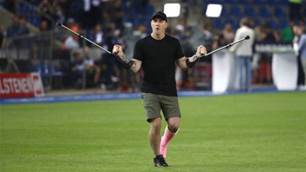