Western United recovered to beat Melbourne Victory 4-3 despite having defender Tomislav Uskok sent off midway through the second half.

Western United will attempt to have Tomislav Uskok's suspension overturned after the defender was controversially sent off during the dramatic A-League derby win over Melbourne Victory.

It took until the fifth minute of injury time on Saturday night for Western to settle the enthralling contest 4-3 when Victor Sanchez capped a fine individual display with his second goal.

The Spanish midfielder's late strike came after Uskok was given his marching orders when shown a second yellow card for a foul on Robbie Kruse.

Replays showing there to be little contact, if any, between the players.

Western coach Mark Rudan bit his tongue when asked about the incident during his post-match press conference, having found himself in hot water earlier this month when he blasted referees and the VAR system.

However, Rudan revealed Western will actively seek to have the automatic red card rescinded by the A-League's match review panel under the 'Obvious Error Application'.

If the appeal is successful, it will leave Uskok free to play in the important meeting with Western Sydney Wanderers in Ballarat next week.

"I got myself into a bit of trouble and I had to reflect on what I said a few weeks ago," Rudan said.

"I don't want to do that again, but I think everybody saw it (the Uskok-Kruse incident).

"We've already seen another team (Central Coast Mariners) have a card rescinded ... so we'll be looking to do the same thing."

Western fell behind to a Callum McManaman strike during the first half at Marvel Stadium but hit back through Sanchez and were in full control when Besart Berisha twice headed goals from Alessandro Diamanti crosses.

But a Jacob Butterfield strike gave Victory hope before Uskok was sent off, and Rudy Gestede levelled proceedings eight minutes from time.

Sanchez struck again with one of the final kicks of the game.

It saw Western maintain their unbeaten record against Victory, with four wins and a draw from five meetings with their crosstown foes since joining the A-League last season.

Rudan hailed his side's fighting spirit and the burgeoning rivalry between the two Melbourne clubs, which has already produced multiple classic matches.

"It's what the league needs; we need rivalries all over the place," Rudan said.

"We were the new kids on the block and it just so happened that we chose Melbourne Victory to be our biggest rival.

"I love it. Why not take on the best and the biggest?" 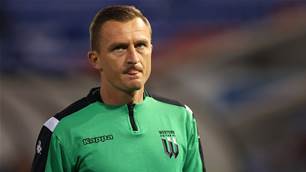 'I've still got it...' - Berisha wants to prove a point to Victory