Bruce Kamau’s move to the Greek Super League - coupled with the likely absence of any A-League faces from Australia’s next World Cup squad - has boosted the attacking weapon’s hopes of landing a maiden call-up for next month’s Qatar 2022 qualifiers against China and Vietnam.

The ex-Western Sydney Wanderers flyer’s decision to join OFI Crete in July centered on fast-tracking his Socceroos ambitions. And Kamau, 26, is understood to be in coach Graham Arnold’s calculations for the September 2 clash in Doha against China and follow up meeting with Vietnam in Hanoi five days later.

Due to onerous ongoing quarantine regulations imposed by Australian authorities, A-League based stars like Mathew Leckie, Chris Ikonomidis and Andrew Nabbout are likely to stay home next month, limiting Arnold’s attacking options down the right where Hibernian’s Martin Boyle and Denmark-based Awer Mabil are the remaining regulars.

All of which weighs in Kamau’s favour as he embarks on a three-year contract in a league where he will pit his prowess against heavyweights like Olympiacos, AEK Athens (on the opening day) Panathinaikos and PAOK.

Whilst a TV rights wrangle has delayed the start of the Greek season until next weekend at the earliest, Kamau has been training hard and says he’s ready to prove he can transfer the form which made him Wanderers’ player of the year onto the national team stage.

“I’m going to keep working hard and if I do get a call up I’ll be ready,” Kamau told FTBL from his new Mediterranean island base.

“My thinking on coming here was a lot about trying to break through at international level.

“It’s all about pushing for a cap and being part of the World Cup squad whilst trying to help the club challenge at the top end of the table domestically, and maybe qualify for Europe.

“I’ve got some momentum going and want to pick up from where I left off last year by scoring goals and providing assists.”

After seven A-League seasons, the former Adelaide United and Melbourne City marauder conjured 12 goals in 23 Wanderers appearances in his farewell year to seal his European move.

His ability to play wide right, as a wingback or second striker provides Arnold with further inducement to throw him in at the deep end.

“Coming to Europe means challenging myself and that’s how you can get noticed by your country,” added Kamau.

“I know I can bring something and can step up to the level, whether it’s for my club or internationally.

“When things get too comfortable it’s easy to slip into a routine. I needed to push myself by coming here so that I can continue to improve and grow.

“I’ve got good players around me here and I think I’ve adjusted well. I can’t wait for the season to start.”

Arnold is expected to unveil his squad in midweek as he wrestles with the myriad dilemmas posed by government refusals to grant travel bubbles for players, leaving Australia to likely adopt Qatar as their surrogate home, for the time being at least.

Assessing the journey ahead for Australia, Kamau said: “Of course it’s always easier to play on home soil but the national have the players and the coach to go anywhere (during the forthcoming qualifiers) and believe they can win.” 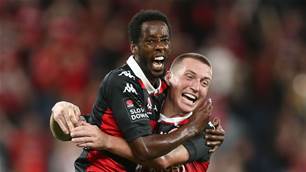