Edwards left Scottish side Hearts in the off-season to join the Brewers. The midfielder has quickly hit the ground running at the Staffordshire outfit this season and already made 24 appearances, bagging three goals and two assists.

Playing under manager Nigel Clough, the former Olyroo and Young Socceroo is thriving.

"It’s been really good,” he told FTBL. “I signed in July, I had a amazing four years in Scotland so it was a good time to come back to England and the Football League.

"I’ve been enjoying it. The manager’s top quality, it’s been a good start.

"I’m playing regularly so I’m happy. We’re playing a 4-3-3 and in the midfield three we’ve got a good balance in the type of midfielders who’ve been playing.

"I’ve been playing on the right side of midfield and have been more of a box-to-box, number 8 kind of midfielder. Playing a lot of minutes and a lot of high energy, trying to get in the box and score goals, which has happened a couple of times this season, so it’s been good.”

Burton Albion are a small club that was largely unknown until the past decade when they remarkably rose from non-league football all the way to finally reaching the Championship in 2016.

Irvine was the club’s record transfer signing three and a half years ago from Scotland's Ross County and enjoyed a stellar 2016/2017 season at the Pirelli Stadium.

The Socceroo scored 11 goals in 44 appearances, helped them avoid relegation and won the club’s player of the year award before departing for Hull City.

Edwards is on his way to becoming a fan favourite at the Brewers, just like Irvine was.

"The joke at the moment is they like Australians with long hair,” the 26-year-old said.

"I think you find that generally in the UK and Europe, if an Aussie does well at a certain club, they hold you in high regard.

"Jackson’s very similar to most of the Australian players where you’re a good professional, a good person and you’re a hard-worker, and I think they really appreciate that.

"He’s definitely held in high regard at the club, I think he won player of the year here and he made the club a good amount of money as well. 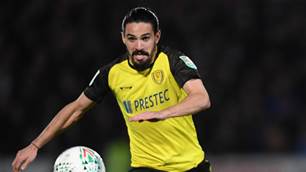