“When I was younger, I’d watch Mitch Langerak play at Melbourne Victory. He was a big idol," Delianov told FTBL today. “I’d watch him with a very close eye.

“He had a fantastic season when he got his chance. It felt like he was someone I could be like."

Size wise, certainly, the two are similar. They are both big, and both made their A-League debuts as teenagers.

Langerak as an 18-year-old at Melbourne Victory, Delianov last month as a 19-year-old for Melbourne City.

“We both made our debuts at a similar age," said the teen. "I always idolised Mitch even after he signed for Borussia Dortmund.

“He’s my biggest idol, I’ve been inspired by him for sure." 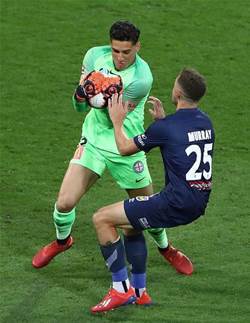 Delianov on his A-League debut

While Langerak moved relatively early in his career - first to Germany and now to the J-League - Delianov's first move has gone across town to the west of Melbourne.

He kept a clean sheet – which is never a bad way to start your professional career.

“I got a taste," he said. "It was AAMI Park where I always wanted to play.

“I felt ready. Mentally ready. I was relaxed. It was something you work your whole life for.

“And to be honest, I didn’t want the game to end.”

The Mariners did. They were smashed 5-0 by City. 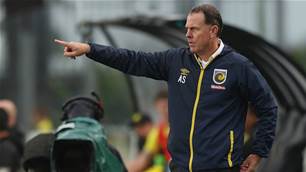