Perth's love affair with Manchester United continued on Thursday evening during the team's open training session, but there was also a cheeky dig from the club's arch rivals Liverpool.

Up to 10,000 fans turned out to the WACA Ground to watch their Manchester United heroes go through their paces.

But a cheeky Liverpool fan couldn't help but have a crack at Manchester United about an hour before training began.

A plane flew above the WACA with a banner reading: 'Liverpool FC - 6x European Champions!' 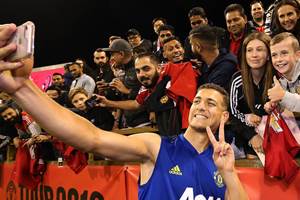 Manchester United fans finally got to see and meet their heroes when 10,000 turned up at the WACA to see the team train ahead of their friendly with Perth Glory.

Perth has been painted red during Manchester United's visit.

Red lights have bathed some of the city's most famous structures, including the new $1.6 billion Optus Stadium, with thousands of fans walking around the streets with their Manchester United jerseys.

Manchester United will take on Perth Glory on Saturday night, before facing off against Leeds four days later.

French midfielder Paul Pogba has dominated headlines since arriving in Perth, with his future and relationship with his teammates put under the spotlight.

Pogba received a loud cheer from the crowd but also some boos when his name was read out at the start of training.

Romelu Lukaku, who is another player who is reportedly keen to leave Manchester United, also received a sprinkling of boos amidst a strong cheer.

The biggest cheer was saved for coach Ole Gunnar Solskjaer, who is a club legend and has now been handed the task of ensuring Manchester United becomes an on-field powerhouse yet again.

Players looked relaxed as they went through the 70-minute session.