The Western Sydney Wanderers defeated Central Coast Mariners 2-1 in a thrilling return to Bankwest Stadium, but it wasn't a homecoming to Parramatta that had fans rejoicing, but another VAR controversy that left fans livid.

The match was locked at 1-1 with either side poised to break the deadlock.

Tensions were rising as a header from Mohamed Adam flashed across the box and Dylan Fox's waiting arm made contact. 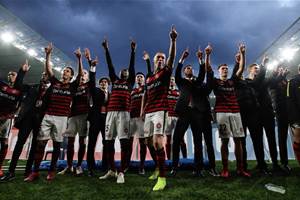 17,091 fans inside Bankwest Stadium, and tens of thousands watching at home were waiting for over three minutes for referee Alireza Faghani to pull the game back for what looked like a clear and obvious error.

I don’t care if it is the right call - I simply hate the use of VAR. #WSWvCCM

The A-League has been back for 2 games and the VAR has already ruined what we love. If this is what our game has come to, then the future really isn't looking good. #VAROut #ALeague #WSWvCCM

What would have happened if CCM scored during the VAR review? Too many holes ripped in the space-time continuum man. It’s not right #WSWvCCM

That VAR check was almost as long as the #ALeague off season......#WSWvCCM

I’ve had a kid and put it through university since the handball...#wswvccm