Melbourne Victory’s 2-1 victory in the FFA Cup final against Central Coast Mariners wasn’t a cup final for the ages besides three absolutely world class goals and a few minutes of utter delicious chaos in injury time. FTBL's Vince Massara analyses how Victory came out on top.

Jason Davidson’s free kick 20 minutes from full time was the real difference on the night, with both Chris Ikonomidis and Oliver Bozanic scoring well taken goals late in injury time to give the match a few moments of tension before the final whistle.  The 2021 FFA Cup final eventually ended 2-1, with Victory deserving the win.

More FFA Cup news can be found on FTBL.

Cup Finals are not usually open-ended games, and this was no different at the start. The game was a real arm wrestle in the early minutes, with both sides coming out of the gate looking to test each other’s defence with longer balls over the top, probably trying to catch a defender blinded by the smoke from the unnecessarily large amount of pre-game fireworks.

Needless to say, none of that really worked. However, if you had to pick a winner, Central Coast had the better of the impromptu ping pong match - getting young striker Mattheus Moresche in with a couple of half-chances.

Once the game settled down, it was Victory who looked the most likely and had the best of the chances - most of which came from the right flank.

At the start of the game, one would have expected Victory to get a lot of their success down their left side. For a team that hasn’t really had great ball progression numbers this season, Victory’s left side of Jason Davidson and Ben Folami has been a constant threat.

Davidson leads the A League Men in progressive passes per 90 minutes (only looking at players who have played over 500 minutes) with 17.4 according to Wyscout and over 2 progressive runs too giving him around twenty ball progressions per 90.

Folmani himself is second in progressive carries per 90, so the pair looked likely to do most of the work bringing the ball into attacking areas.

However, as previously mentioned, it was through the right-side that Victory did most of their damage in the first half.

Central Coast defended in a flat 4-4-2 shape and looked to make it hard for Victory to gain any momentum in their buildup, however, there was often quite a gap between their midfield and defensive lines which gave the Victory attacking players room to receive passes between the lines.

At times it looked as though Central Coast were almost leaving the gap there to invite the Victory pass so they could press the pass receiver. However, players like Marco Rojas, Jake Brimmer, and Nick D’Agostino were able to pull off some quick one-touch moves to play through the lines and create space behind the Central Coast defensive line.

Here, we see a bit of a battle between the joint Mark Viduka Medal winners, Jake Brimmer and Kyle Rowles.

Brimmer manages to find a little pocket of space between the Central Coast lines and is closed down by Rowles. Rather than take a touch, Brimmer played a quick one touch pass back to Josh Brilliante who was able to hit a penetrating pass into the space Rowles left behind him by pressing Brimmer. 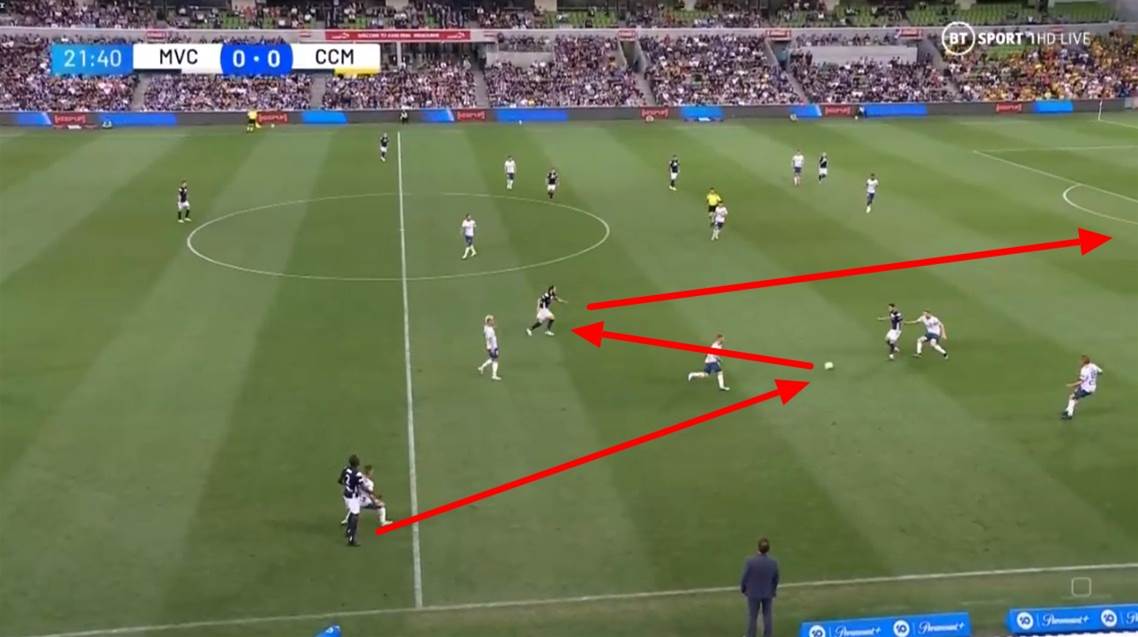 And when that pressure on the pass receiver wasn’t there, the Victory attackers had time to drive into space or try to find a more adventurous forward pass.

In this example, Victory were able to quickly switch the play from right to left, and open up two possible passing options between Central Coast’s midfield and defence. 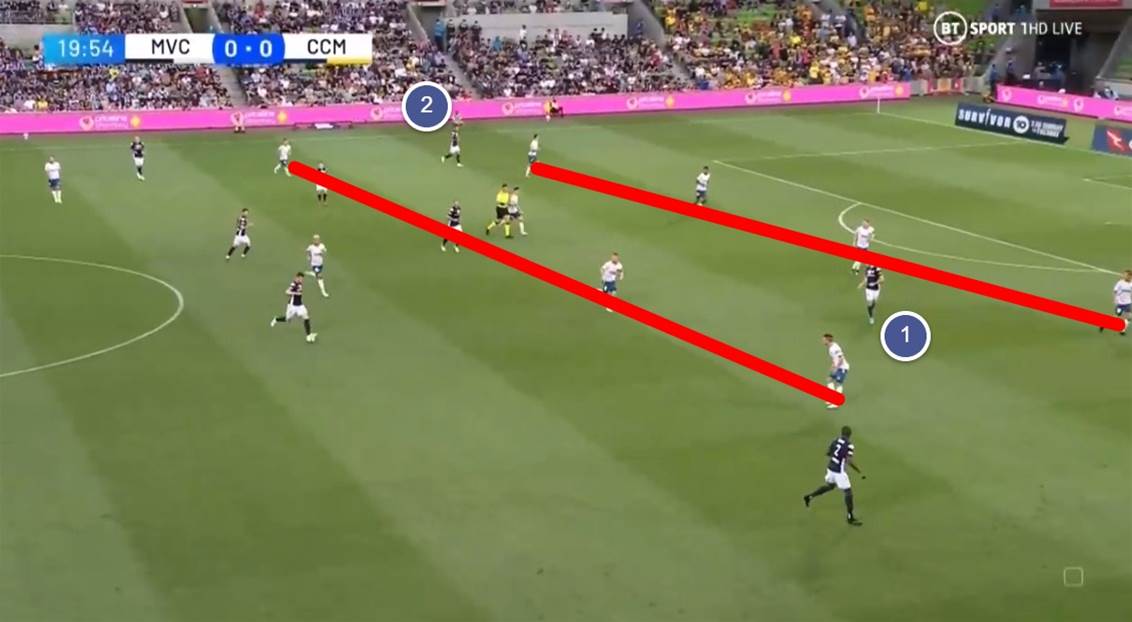 And here’s another example on the right side, Nick D’Agostino found space between the lines and was able to receive the pass, turn and drive into the defence and win a free kick in a dangerous position. 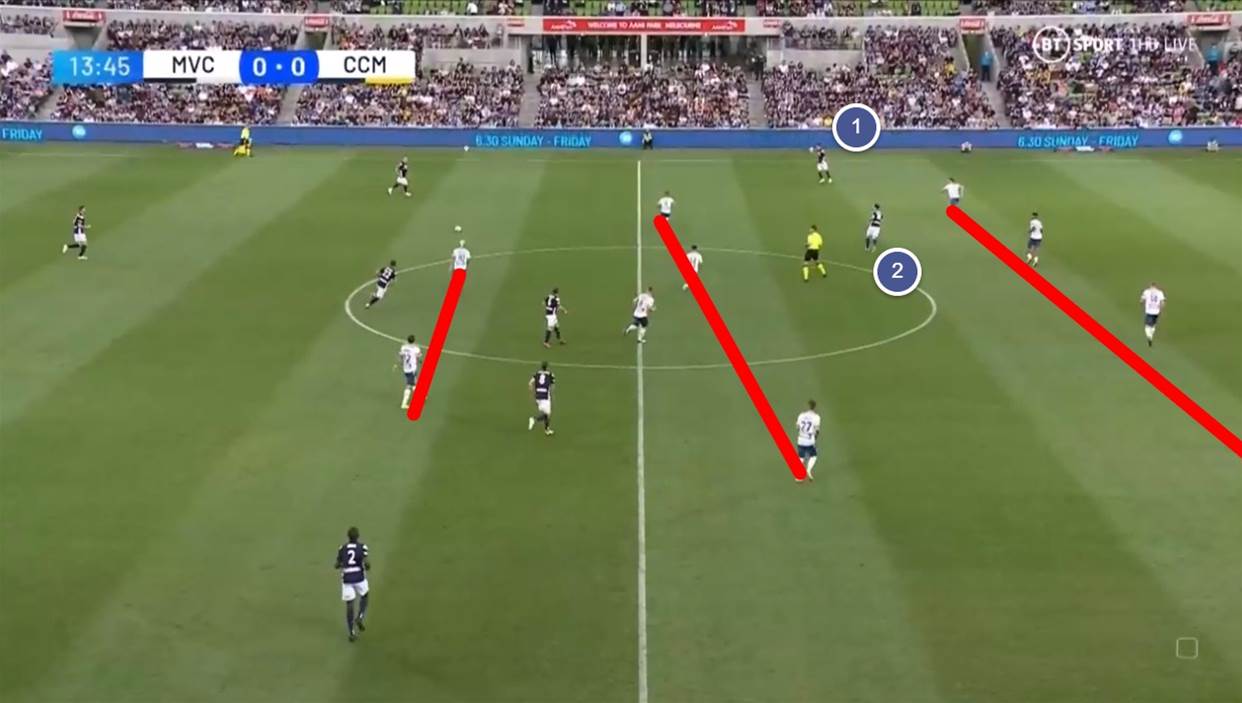 Speaking of free kicks in dangerous positions, it was a similar play in the second half that won Victory the free kick that Jason Davidson opened the scoring with - A free kick that was good enough to win any game anywhere.

This seemed to be a bit of a plan heading into the match. Victory coach, Tony Popovic mentioned after the match that D’Agostino’s “movement” was a key to getting selected over Italian import, and regular starter, Francesco Margiotta.

Marco Rojas is another who was very important in this build up pattern alongside D’Agostino. He found the ball in the half space throughout the match and either played quickly, or would cut in with the ball leaving space on the wing for an overlap for either Jason Geria or Josh Brilliante.

Rojas’ cuts in from the right seemed to cause moments of havoc most of the night for the Central Coast defence.