Football Federation Australia have vowed to get answers from NSW Police over the eviction of a young girl with special needs and her family from the A-League semifinal last night.

Sydney FC fan Rory Carroll tried to take his daughter to the nearest toilet at Jubilee Stadium last night but was blocked by security.

They refused to give him access to the grandstand toilets in the restricted seating area as Carroll was seated in the general admission area nearby.

Instead they insisted he and his daughter walk to the other end of the stadium to go to the disabled toilets there.

But when he returned to his seat, he was surrounded by a crowd of police with their hands on their guns grilling him over the incident while shouting at him.

Moments later a line of 10 cops and more security guards evicted him and his three children from the stadium.

According to Carroll, riot police cars then followed him away from the stadium as he took his kids to a nearby McDonalds for an ice cream.

"My daughter is traumatised," Carroll said later. "If a young girl with special needs is not allowed to climb ten steps to the toilet she uses every other week, then what can I say.

"I was assaulted by security, threatened by a senior police officer screaming at me in front of my children as I sat on a terrace.

"[It was] the same toilet my daughter accesses every week. There is a misunderstanding out there about how children with special needs find comfort in familiarity.

"It does not justify heavy handed security which would be considered assault on a street, nor armed police absurdly screaming.

"The question I must now ask myself is why bother taking my family to stadiums?"

Video of the incident sparked a furious backlash online and in the mainstream press as horrified fans and administrators condemned the heavy-handed police action.

FFA board member Remo Nogarotto said he was appalled by the vindictive approach.

"I cannot believe this," he said on Twitter. "My position on the deliberate profiling of football fans is on the public record but this goes well beyond the pale.

"Our game needs to escalate this politically and demand policing in line with other sports. Sadly I am old enough to have seen our game stigmatised for decades and its fans treated as second class (sporting) citizens.

"If the senior elements of the NSW Police can’t see the absurdity and humiliation of tonights incident then their political masters need to intervene."

He added: "Our game lacks respect it deserves.

"Policing is being done with a clear profile in mind, ie football fan = risk, which is BS and needs to be called out as such.

"I can’t understand how anyone with even just a modicum of pride in the sport they represent, let alone holding any station of authority, could be anything but in the fans corner on this deliberate profiling of our beautiful game."

This morning the FFA vowed to take the case up, but couldn't identify who had made the decision to close off the grandstand toilets to GA seating which led to the confrontation.

The finals series matches are run by the FFA not the clubs, unlike the rest of the home and away season matches, who are responsible for all match day operations.

"FFA and Sydney FC both made a commitment to the fan that they will raise this matter with NSW Police and the venue security provider this morning to obtain further details about the incident.

"FFA has this morning spoken to the NSW Police commander responsible to commence this investigation process." 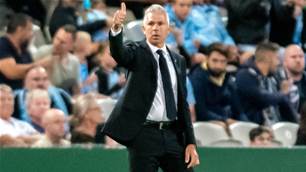