Western United's in-your-face attitude and industrial A-League brand has met with head office approval but there's growing uncertainty about a move-in date for their new stadium.

The new A-League club, which announced Mark Rudan as coach last week, will begin life next season and play out of Geelong's GMHBA Stadium while building a privately-owned venue in Tarneit.

Club officials publicly maintain they'll set up house for the 2021/22 season but that prospect is growing more remote.

Almost six months on from winning the bid with ambitious promises of fast-tracked permits, there's been no turning of soil, as project managers deal with on-site issues.

Chief executive Maurice Bisetto said the club wasn't ready to give up on it and was carrying on its stadium design while navigating the planning process.

"It is a an optimistic timetable but we're still on track to achieve that," he told AAP.

"We have a lot of stakeholders working hard with us to achieve that goal."

FFA chief Greg O'Rourke said he was comfortable with the progress, saying they'd banked on a 2022/23 move-in.

"I've seen project plans, the drawings, they're all recently dated with all the different work going on," he said.

"They're keeping me up to speed with all the challenges ... when we speak to the project people from the Council, they all remain ambitious."

A privately-funded stadium was central to FFA's decision to award Western United the A-League licence.

Bisetto said GMHBA Stadium would make an "absolutely great" interim home for at least eight of their 13 home games.

"In so far as playing football on an oval, it would be one of the better ones in the country to play on," he said.

Discussions with Mars Stadium in Ballarat and other venues are ongoing to house the club's remaining fixtures.

Rudan made a splash on his arrival at the club, saying the established Melbourne Victory-Melbourne City derby lacked atmosphere.

"When I was speaking to Melbourne City throughout (the expansion) process, they were asking me 'why are you putting another team in Melbourne when there are already two?' I said, 'putting a third one in will make you better'," he said.

"I like Western United's approach as being a working class team ... being industrial.

"That will be a point of difference between them and the other two teams in Victoria.

"Them and the Wanderers returning to their new stadium are two really exciting good news stories for the A-League."

O'Rourke said Western United had met all of its license payments, which translates to sending more than $15 million to FFA coffers. 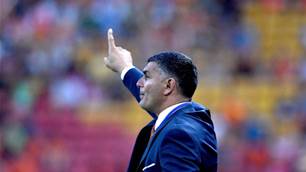