Football Federation Australia is confident it will strike a revised broadcast deal with Foxtel in time for the A-League resumption on July 16.

The remaining 27 matches of the home and away season will be packed into a 28-day period before launching into the finals series, with Melbourne Victory and Western United to kick off proceedings at AAMI Park in a Thursday night derby.

The table-topping Sydney FC will take on third-placed Wellington Phoenix at Jubilee Stadium the following day on July 17.

The detail for the remainder of the season is yet to be confirmed due to the prospect of further relaxations in state border restrictions.

If those restrictions ease as expected, then the clubs from Victoria, Queensland, and South Australia will be able to host games as normal instead of playing 'home' games in NSW.

The news isn't so good for Perth Glory and the Phoenix, who will definitely complete their regular-season games in a NSW hub.

The finals series is set to be crammed into the space of a week, with the grand final pencilled in for either Saturday, August 22 or Sunday, August 23.

But with player contracts now running until August 31, the A-League has the flexibility of extending the finals series - especially if a team like the Phoenix or Glory end up hosting any finals at their traditional homes.

There were fears that Foxtel would pull out of broadcasting the remainder of the season and also renege on its deal to broadcast the code until the end of 2023.

But FFA Head of Leagues Greg O'Rourke said negotiations were looking good, and he expects a revised deal to be signed in the coming weeks.

"We feel positive about both - about the ability to have Fox broadcast the finish to the season, and also be a partner going forward," O'Rourke said.

"The conversations between Fox and FFA are now progressing fairly well."

Wellington are still waiting on approval from the Australian Government to be able to fly to NSW, but O'Rourke expects that to come within the next 24-48 hours.

The Phoenix are then expected to arrive in Australia later this week, before starting a 14-day quarantine period.

With other A-League sides returning to training this Wednesday, Wellington will be at a disadvantage in terms of preparation.

O'Rourke concedes the situation isn't ideal, but said the nature of the COVID-19 crisis meant some things were unavoidable, and the Phoenix weren't the only team affected.

"There are so many different variables," O'Rourke said.

"To actually say that one team is disadvantaged over the other is not 100 per cent, because you've got Newcastle with no coaching staff for two weeks while they're (isolating) in hotels, and you've got a whole lot of other players coming back from all over the world (who also need to isolate)."

Like the English Premier League, A-League clubs will be allowed to make up to five substitutions each game.

With coronavirus restrictions easing, O'Rourke was confident crowds would be allowed back into matches when the season resumed.

Last Friday, Prime Minister Scott Morrison flagged the prospect of sporting venues with capacities below 40,000 hosting up to 10,000 supporters. 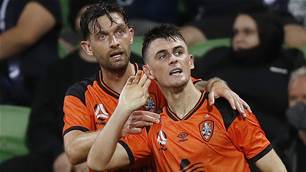