Should Football Australia opt to dump Graham Arnold ahead of the World Cup playoffs, it’s understood a foreign coach is the preferred option as his successor.

Three of Australia’s four previous successful World Cup qualification campaigns have been masterminded by overseas coaches - Guus Hiddink (2006), Pim Verbeek (2010) and Holger Osieck, who was sacked after steering the Socceroos to Brazil 2014.

Ange Postecoglou took the baton and piloted Australia to Russia 2018 through a torturous playoff route.

Reports this week suggested Melbourne Victory’s Tony Popovic might be installed imminently if, as anticipated, FA looks past Arnold for a potential saviour on the road to Qatar 2022.

However, there is hesitation within the governing body to go local - one reason being candidates like Popovic, John Aloisi and Patrick Kisnorbo might bring inbuilt prejudices and preferences whilst installing an outsider would see the emergence of a more dispassionate and detached figure with no baggage or skin in the local game.

The theory is that a well-credentialed and seasoned foreigner would be able to zoom out and bring fresh perspective and insight ahead of two pivotal playoffs in Qatar in June.

Though Arnold remains in situ for Wednesday morning’s final - and now largely irrelevant - Group B clash with the already qualified Green Falcons in Jeddah, backstage FA are in the midst of succession planning.

Names like Marcelo Bielsa, Tony Popovic, Marcelo Lippi, André Villas-Boa, and even a second stint for Bert van Marwijk, have been thrust forward, and there are others FA will no doubt be considering in what would initially be a short-term trouble shooting role.

If successful, juicy bonuses and benefits would be on offer to take charge in Qatar later this year for a miracle worker-in-waiting.

Whoever might take the mantle of a Socceroos side in a slump will have just a handful of training sessions to prepare for a do-or-die Asian playoff against the third placed nation from Group B - either UAE or Iraq.

Should Australia navigate that hurdle - far from guaranteed on current form - then a week later the daunting task of overcoming the fifth-best South American country looms, in the form of either Peru, Colombia or Chile.

FA chief executive James Johnson is currently in Jeddah with the Australian party, a potential grim reaper who could swiftly end Arnold’s four-year reign in the hours after the final whistle.

Or, alternatively, grant a reprieve. 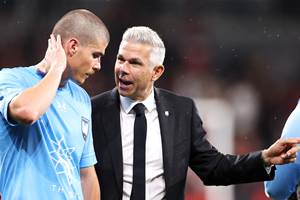 As his team prepares to chase glory on two fronts, Sydney FC coach Steve Corica has labelled 2021-22 as the toughest A-League Men's season ever. 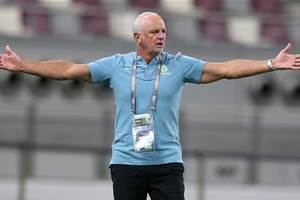