Former head of the Hyundai A-League Archie Fraser has been confirmed as chief executive of new club Macarthur South West Sydney ahead of them joining the A-League next year.

“Archie Fraser is an experienced executive leader, not just in football and sport, but in the corporate world also, and we are delighted he has joined us,” said MSWS Chairman Lang Walker this morning.

After leaving Football Federation Australia in 2010, Fraser teamed up with maverick billionaire Clive Palmer to head up his rival Football Australia organisation, set up in protest over the way Gold Coast United were kicked out of the competition.

Since then though, Fraser has been involved in V8 Supercars, commercial sponsorship and stadium projects with Port Adelaide and North Melbourne Football clubs and with the Gold Coast Titans and Manly Sea Eagles in the NRL.

“Archie has a clear understanding of running a company, a club and a business on a ‘no surprises’ basis," said Walker.

“He understands the need to keep the board and owners informed, but he also has a passion for football and a depth of knowledge about what drives that passion for fans, volunteers, the players and the football staff.

“As we said from the outset, we are very serious about this team. Everything we have done so far - and are planning to do - demonstrates our commitment to this region, the club and also the growth and expansion of the A-League and football in Australia more generally."

Walker added: “I’m new to football, but as a business person I can see that the A-League is critical to football and vice-versa, and strong leadership is needed at every level of the game.

“From our perspective, Archie Fraser is the right man at the right time to guide the development of this club, and for Macarthur South-West Sydney to make a contribution to the growth and development of the region and to the game.”

Prior to his 14 months in charge of the A-League for FFA, Fraser was CEO of St Kilda Football Club for four years, where he oversaw significant achievements both on and off the field including record growth across memberships, revenues and profits and average attendances. He also worked with State and local governments to create a $15m training and administrative headquarters.

Fraser said that his number one sporting passion is, and always has been, football.

“I have worked in and around other sports over my career, as well as outside of sport in ‘regular’ jobs," he said.

"But like so many other passionate fans and people in football whom I know, the round-ball game is part of my DNA.

“Having been a keen observer, while being away from the game professionally for nine years, I have developed an even greater appreciation and understanding of the issues the game faces, but more importantly the potential it has through people-power from both a playing and supporter perspective.

“I will be bringing that knowledge and understanding to the role. I intend making sure that this club is smart, savvy and successful and is a team for all of south-western Sydney to be proud of.

“We may be new to the A-League, but the region is not new to football, and we will also draw on that history and heritage in helping to shape this club into something very special, as well as to make a contribution to the A-League and to football.” 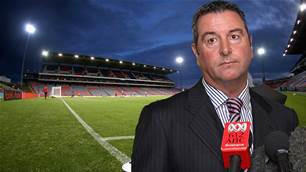