Perth's charge towards the A-League finals has kicked up a gear with birthday boy Andy Keogh scoring four in a 5-1 win over fellow contenders Western Sydney.

Andy Keogh has scored four goals on his 35th birthday to lead Perth Glory to a 5-1 A-League thrashing of Western Sydney Wanderers.

Keogh, who remarkably hadn't scored in his previous 18 appearances this season, snared two goals in the first half on Sunday, including a long-range belter.

He then notched another two after the break to keep Perth's march towards a once-unlikely finals berth rolling.

"Andy's had a tough season of not scoring but he's done a lot of the other work that you probably don't get a lot of credit for. He had a lot of assists and tonight was his night.

"It was fantastic to see all the guys get behind him and celebrate with him, especially now that he's a year older."

Garcia hailed the Glory's belief as their third win on the bounce drew them within three points of the top six.

Perth got off to the perfect start in the fifth minute when Diego Castro released Kosuke Ota down the left and the fullback ripped a tremendous low cross into the path of Keogh to head home.

The Irishman's second goal 19 minutes later was one of the best of the season.

Keogh had headed the ball down to Bruno Fornaroli, who flicked it back.

The Irishman then smacked a long-range lob off the half-volley, and over Wanderers goalkeeper Daniel Margush, who was caught off his line.

"A bit of luck was required and it's my birthday so why not?" Keogh told Fox Sports.

Four minutes into the second half, Western Sydney hit back when Bruce Kamau fired a cracking strike past a diving Liam Reddy.

But 15 minutes later, Perth regained their two-goal advantage from the penalty spot.

Wanderers defender Patrick Ziegler was sliding in to block Joel Chianese's cross but the ball flicked up and caught his arm, with referee Daniel Elder pointing to the spot.

"If you don't get the small details (right) in your defending and obviously in your attacking ... then you leave yourself open and vulnerable to concede goals and we certainly did today," he said.

In the 72nd minute, Chris Ikonomidis' cross took a deflection and drifted across goal but a leaping Keogh was on hand to tap home his fourth.

Then deep into injury time, Osama Malik slipped a brilliant through-ball for a clinical Chianese to complete the rout. 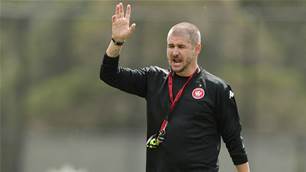