Having played 39 games with Phoenix, Fox’s football journey most recently took him to South Korea where he joined FC Anyang.

A defender or defensive midfielder, Fox was a standout at the ‘Nix where he earned Players’ Player honours in the 2017/18 season and was runner-up to Roy Krishna for the club’s Player of the Year award.

After meeting his new Mariners teammates at training for the first time, Fox today said he was excited to get going under coach Alen Stajcic.

“The Mariners are a team I’ve watched from afar, a club I really want to play a major role in their success,” Fox said.

“After speaking with Alen and hearing his vision for the club, it was very inspiring and could see immediately that it was something I wanted to be involved with.

“Alen’s vision for the club going forward, I could tell he really cares about the club, and my first impressions are that he is a coach that the players will give 110% for – in every session – every game.”

Stajcic welcomed Fox to the Mariners and added: “We’re delighted to sign Dylan who is a great addition to our squad, adding depth to our backline and flexibility in our holding midfield roles.

“With four A-League seasons to his name and one where he was voted by his peers as the Players’ Player, we have a defender who has proven success.

“The signing of Dylan continues to build good competition for places across our squad and we look forward to seeing him in action for the Mariners.” 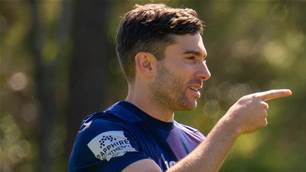