Newcastle Jets are winless in 11 games with a tough run coming up and coach Craig Deans says they can't settle for spirited efforts alone.

Things won't get much easier with games against second-placed Sydney and third-placed Central Coast Mariners next up, but Deans demanded more than just spirited efforts.

"We have to be careful about being happy to be competitive," he said.

"The whole point is to win games and points and (in 16 of 20 games) it's either been a one-goal loss or a draw or a win for us.

The Jets haven't kept a clean sheet in those 11 games and Deans emphasised the need to tighten things up at the back.

"The period where we had some success was based on three clean sheets in five games."

The Jets are hopeful of regaining on-loan attacker Ramy Najjarine (ankle), who couldn't have faced parent club City anyway, and Connor O'Toole against Sydney next Saturday.

Skipper Nigel Boogaard could potentially return after he was on the bench against City while Roy O'Donovan (yellow card suspension) will be available. 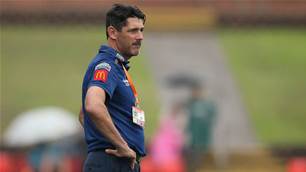