Ending his time with Adelaide on a high is the focus for coach Marco Kurz as he enters what could be his last A-League match with the Reds.

Confirmation of Warren Joyce's departure from Melbourne City was news to him, but Adelaide coach Marco Kurz isn't rushing out his CV to any vacancies just yet.

Kurz will lead the Reds into Friday's A-League semi-final knowing a defeat to Perth Glory will end his two-years in charge.

The German didn't rule out pursuing the City job, he's just going to wait until Adelaide's season is over before deciding his own future.

"(That's) not a question for now. I've had no contact to Melbourne City and my focus is for the semi-final," Kurz said.

Adelaide's decision not to extend Kurz's stay at the club is somewhat surprising given they've made finals both seasons he's been at the helm and won last year's FFA Cup.

It's a practical decision as far as Kurz is concerned given he and the club's hierarchy were at loggerheads over the Reds' future.

"It's important that the club and the coach have the same vision. We didn't," he said.

"That makes no sense to work together in the future and that's what's happened here. That's the normal way in football.

"I'm not angry about it, my focus is to finish the season as best as I can."

Kurz is also not so sure people should believe his time at the club is complete despite Adelaide being massive underdogs against the title favourites.

"If you reach the semi-final it's part of the rules here that you have a chance as a team from position four to reach the grand final and we want to do this," he said.

"My goal is to have another training session next week and maybe another press conference." 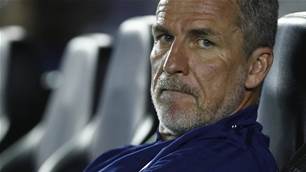