Australian defender Giancarlo Gallifuoco is making his mark in Italy with Serie C side FC Rieti.

Gallifuoco has spent most of the past six years in England after leaving the AIS and signing with Tottenham as an 18-year-old.

He had a season with Swansea City before a brief spell with Melbourne Victory in the A-League.

The former Joey, Young Socceroo and Olyroo then had two years in England's National League with Torquay United and Dover Athletic.

Gallifuoco admits the style of football in Italy has been vastly different to his experiences in the UK.

"Italian football is a style of its own," he said.

"Definitely a big change  football-wise, a lot less physical than the UK. It’s all about thinking tactically, playing creatively and constantly keeping the ball moving.

"I started my career here in Italy when I was 16, so coming back to the home ground and being able get back to playing this style of football has been great."

Rieti are sitting in 15th spot in the 19-team Girone C division with three wins, one draw and six losses from 10 matches.

Considering the club was promoted from Serie D last season, the defender is pleased with how his side are coping.

"It’s been up and down, incredible highs as well as the occasional low, which I think is quite common with every club," Gallifuoco said.

"Our team is full of talented footballers and for a new club with such a young team, in the hardest division in our league (Girone C), I think we’re coping quite well. We have played games against Serie A Legends and are up against clubs with incredible team budgets.

"The aim for all of us is to play our best football, make the fans proud and keep us in the upper section of the Serie C table. The table is so close, you can be both two points from the relegation zone and two points from a promotion place at the same time.

"And I’ve heard it remains like this until the end of the season." 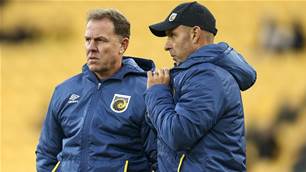 Mariners want some luck against Victory