Gallop refrained from attributing blame to any one area, saying football “needs to think” about its marketing strategies. He warned off promotion and relegation as a potential solution.

"No-one could be happy with the pure output, in terms of numbers around attendances and ratings," Gallop told SEN.

"Football needs to actually think about how it's marketed, both at club level and our level as we go into the next season in October.

"Expansion can often have pitfalls and be a very costly venture in Australian sport ... we need to think carefully about that.”

The A-League’s average attendances have plummeted for many clubs this season. Only Adelaide United and Newcastle Jets have higher averages than last campaign, while Sydney FC – despite their continued dominance – are attracting almost 4,000 less fans per game.

Meanwhile, the first three A-League rounds on Network Ten’s 'One' saw a 15% decrease from the average ratings for the same rounds last season on SBS Two.

"It's still a relatively young competition, it doesn't have the generational support of the AFL and NRL,” he said.

"Of course, those never tell the full story, the quality of the football has been high, Sydney FC have just played beautiful football and look almost unstoppable.

"But it's another reminder of the competition in the Australian market."

Gallop wasn’t being caught in crisis-talks however, insisting that Australian football had a positive base to build on.

"The sport has a lot of reason to be optimistic, confident about the future.

"The challenge is to turn those grass roots participants into fans of the A-League.” 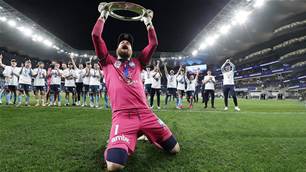