Football Federation Australia chief Executive David Gallop has confirmed he will quit the job at the end of the year, ending months of speculation.

It sparked a wave of change at the governing body including the move to create the new independent A-League and W-League body, owned and run by the clubs.

That's set to go through in time for the start of this season if a final deal can be arranged by the end of this month.

But it will leave the FFA with a much reduced budget and set of responsibilities – and Gallop as CEO, believed to be on around $1.5m a year – will no longer have the same role as previously.

One of Lowy's last acts as FFA chairman was to sign off a new two year deal for Gallop to guarantee his position under the new regime, but the reduced FFA footprint no longer makes his position viable. 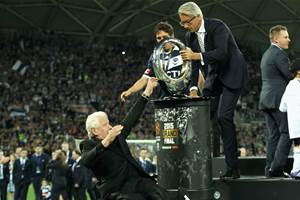 Today Gallop confirmed his exit and set the date for New Year's Eve.

“It has been an honour to lead FFA for the last seven years," said Gallop today.

“With the NLWG recommendations to bring about fundamental changes to Australia’s professional competitions – the Hyundai A-League, Westfield W-League and Foxtel Y-League (the Leagues) and FFA, the chief executive’s role as it currently exists will be a very different, narrower role.

"It makes sense for everyone to have time to openly determine what that new role and new leadership looks like. “

Gallop joined the FFA in 2012 to replace former CEO Ben Buckley and arrived from the NRL as the A-League enjoyed a crest of the wave success with the arrival of Western Sydney Wanderers and big name stars like Alessandro Del Piero, Shinji Ono and Emile Heskey.

But critics claim he allowed the league to stagnate over the ensuing years, stifling growth and causing friction with fans.

He presided over a series of crises, including the fan ban, the Matildas going on strike over pay negotiations, the sacking of Alen Stajcic and the ongoing saga with crowd figures and TV ratings which have put the value of the next TV rights deal in doubt.

Gallop also was behind the sacking of Holger Osieck and Ange Postecoglou's exit after both had qualified the Socceroos for consecutive World Cups, only see the team crash out at the group stage both times.

During his seven-year reign, he was boss of four different Socceroos coaches and four different Matildas coaches. A-League attendances peaked in 2013 before falling back to the same level as when he joined the FFA.

But his era also saw Australia host and win the 2015 Asian Cup, as well as qualifying for the 2014 and 2018 World Cups and the 2015 and 2019 Women's World Cups, and achieve record participation numbers.

“It has been very satisfying to be part of so many important moments," he said today.

“There are challenges given the expectations that are created by the global mirror that is held up to the game in this country’s competitive sporting landscape, but enormous growth opportunities are available if the stakeholders are united.

“My aim is to ensure there is a seamless transition, with minimal interruption to the good work of the very many people in the Member Federations, the Leagues, the NPL and community clubs who work so hard to deliver on the game’s extensive agenda.

“I extend my sincere thanks to Chris and the current board as well as the past chairmen and board members who gave me the opportunity to lead a wonderful team of talented, passionate and dedicated people at FFA.

“There is plenty of work to be done including the finalisation of our bid to host the FIFA Women’s World Cup in 2023.  It would be fantastic on so many levels if Australia could secure such a huge football tournament and world event.”

The FFA board today thanked David for his contribution and for signalling his intention early to allow them to find a replacement for what will be a redefined role in 2020.

“David has provided strong and distinguished leadership over a long period and particularly through a difficult last few years for FFA as we have managed the governance and structural changes around the game," said Nikou.

"Working together for the next six months, we will continue to reposition FFA for ongoing success.   While he will be with us for some time yet, David will leave us with our respect and sincerest best wishes for continued success in the next stage of his career.

“The timing of David’s decision is predicated on the recent progress of the New Leagues Working Group with regards to determining the future governance model for the Australia’s Professional Football Leagues and FFA.”