Speaking at yesterday's annual general meeting, Gallop laid out his seven guidelines for the next boss of the game as it prepares for life after his imminent departure in December.

And he warned: "Don't expect everything you do to be popular. Do what is right, not what gets you votes."

Gallop acknowledged the efforts of the game since his appointment, and told the next boss to "recruit and retain excellent people" and to broaden the game's appeal.

"Don't be so insular as to assume you know best," said Gallop. "To really grow, football has to be serious in reaching beyond its traditional base.

"That has to be at all levels, including attracting fans from outside football. Don't pay lip service to being inclusive, live it."

Gallop thinks going forward, those in charge should "develop governance structures" that allow stakeholders to have a meaningful input in decision making from the grassroots to the board room.

The CEO implored his successors to make budget decisions that "chase revenue for the whole game in mind" and set out the challenge to the football media to "report both sides of the debate."

He also encouraged those in the board room to "clearly define the roles of each body" from clubs, state federations to associations and committees in the congress.

But perhaps the comments that will ring in the ears of those in the room will be his fourth wish, which he spent all but a sentence on.

Acknowledging the unpopularity of what he was to say, Gallop warned to the stakeholders about indecision and division.

"Be vigilant about the demarcation between the boards and management," Gallop said. "If that collapses, no-one will do anything well.""

Looking back on his own seven year stint in charge, Gallop said his legacy would be to have guided the game through rocky times of change.

"There's been so much change, whether it's changing now the structure of the game or the various changes at board level," he said. "It hasn't necessarily always been easy.

"But we've navigated this sport to a point where I think there's real blue sky ahead."

Chairman Chris Nikou confirmed a replacement for Gallop will be announced "shortly". 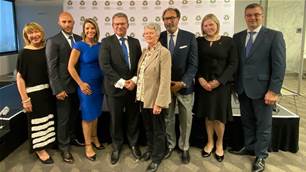 Wilshire and Fitzroy elected to FFA board