Andy Keogh left Perth Glory in 2019 after falling out with then-coach Tony Popovic but the Irish striker is happy to be back at the A-League club.

His exit was far from pretty but Perth Glory striker Andy Keogh hopes to embark on a fresh chapter at the A-League club by forming a successful partnership with fellow goalscoring ace Bruno Fornaroli.

Keogh left Glory at the end of the 2018/19 season after a falling out with then-coach Tony Popovic.

Irishman Keogh was left shocked after being relegated to the bench for the 2019 grand final loss to Sydney - and only being told of the decision when he arrived at the ground.

He was desperate to finish his career at the Glory so he jumped at the chance to rejoin them once Popovic departed and Richard Garcia was handed the coaching reins.

"When the staff changed," was Keogh's not-too-subtle response when asked when he finally felt he could return.

"It's great to have him (Garcia) as head coach.

"It will be fantastic to work under him and give my all to help him achieve success."

Glory's latest A-League campaign will finally get under way on Wednesday when they host Adelaide United at HBF Park.

Keogh scored 15 goals for Perth during the 2018/19 campaign, and he will be aiming to form a potent strike force with Fornaroli.

Uruguayan scoring star Fornaroli has scored 59 goals from 98 A-League games, while Keogh has 55 from 122.

"I feel we're both intelligent players that link up well," Keogh said.

"He's got a proven goalscoring record, I have as well.

"We've got over 120 A-League goals going in to the season between us, so I don't think there are many strike partnerships that have had that in this league before."

Glory captain Diego Castro is expected to miss the clash with The Reds due to a minor leg injury, while Brandon Wilson is sidelined with a similar issue.

Defender Osama Malik (shoulder) and Chris Ikonomidis (knee) are still sidelined and no date has been set on their returns.

Adelaide have posted a win and a draw from their two matches in a bright start to the season but last played on January 3.

Coach Carl Veart confirmed import Javi Lopez and defender Ryan Strain (groin) wouldn't travel to Perth to ensure they were fit to feature against Melbourne Victory in Adelaide on Saturday.

* Adelaide are undefeated in the A-League under Carl Veart, with three wins and four draws.

* Perth are chasing their first opening-game win since the 2014-15 season, having recorded three draws and two losses in their past five season-openers.

* Adelaide beat Perth 5-3 in their most recent clash in July 2020, snapping a five-game losing streak against the Glory. 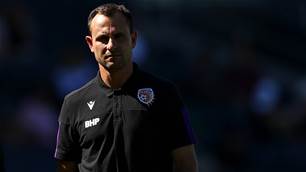