A-League's Perth Glory chief executive Tony Pignata says it will be wrong of the WA Government to impose a three-vaccine policy on any fly-in, fly-out teams visiting Perth.

Fremantle and West Coast's AFLW clubs received good news on Wednesday when they were informed they would be able to host games in Perth this weekend.

Both teams had been stuck in hub life on the road for more than three weeks and they are now set to play a run of games in Perth.

Fremantle will play Carlton at Fremantle Oval on Saturday while West Coast host Collingwood at Mineral Resources Park on Sunday.

All Fremantle and West Coast players who were eligible to receive their booster shot need to get it in order to return to Perth.

But it's understood all eligible Carlton and Collingwood players will also be required to have their booster shot if they are to make the trip west this weekend.

Players who recently tested positive to COVID-19 and therefore aren't yet able to have their booster shot will still be granted permission to make the flight.

The WA Government is yet to publicly announce the vaccine requirements for visiting teams but the precedent being set for the AFLW spells bad news for Glory.

The A-League Men club hasn't played a home game since their round-one fixture on November 20.

There are plans in place for Glory to return to Perth in late February or early March for a run of up to eight consecutive home games.

But those plans could be scuppered if the WA Government demands that visiting teams will need to be triple jabbed.

"It's going to make it hard," Pignata told AAP.

"My argument is - and this is what I'll be bringing up with the health officer - is that teams who are coming in and out are not going to be residing in WA, so they're not going to pose a risk.

"They're basically coming in as a bubble, quarantining and getting out.

"If you look at 11 teams, 20 players each team plus stuff, you've got over 300 people who are going to have to get triple vaxxed in two weeks. That's wrong.

"We agree that people coming back to Perth to reside, being our players and staff, they should be triple vaxxed. No problem.

"But teams flying in and out - to get them triple vaxxed is going to be difficult in an amount of time for us to play home games."

A host of players from varying sports have been reluctant to be vaccinated during the season due to the potential side effects they may suffer.

"Some people could be three or four days out and coaches won't want to lose their best players," Pignata said.

"So when is the right time to do it? There needs to be a little bit of common sense." 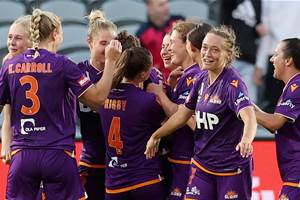 Perth Glory will be aiming to bounce back from a disappointing 3-3 draw with Canberra when they take on Adelaide at Central Coast Stadium. 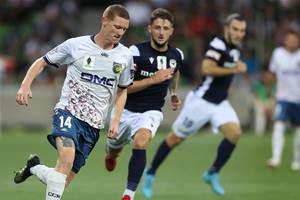