Perth Glory defender Dino Djulbic says he still remembers the sound of bullets from his time growing up in war-torn Bosnia.

When Perth Glory defender Dino Djulbic steps out for Sunday's A-League grand final against Sydney, his late father Esad will be at the forefront of his mind.

Djulbic was just nine years old when he and his family fled war-torn Bosnia.

His father stayed behind to fight in the war.

A few months later, Djulbic was given the devastating news that his father had died.

For three long months Djulbic and his family grieved until a phone call changed their lives forever.

"Someone rang up and said that he's alive and that he's coming to Croatia," Djulbic says.

"We were living in Slovenia at that time. My mum was like, 'Oh no, it can't be real'.

"And we didn't believe it until he rang from my auntie's house in Croatia.

"Even now I feel a little bit teary. We really didn't believe it until he actually got there."

Djulbic's dad played professional football in their hometown of Doboj.

But as the war intensified, the family decided to flee.

"But when there's bullets and stuff flying around, you know there's something not right.

"We were mainly inside homes and they wouldn't let us out much when things were happening.

"It was more the noises of bullets and planes that we could hear. But we got out just before it got really bad.

"We left our home town and we were travelling around Bosnia for about three months while the war was on.

Djulbic and his family moved to Australia when he was 15, and Perth has been his adopted home base.

The 194cm defender has played in China, Germany, the United Arab Emirates, and Malaysia during his journeyman career, but he returned to Glory in 2014 to be closer to his dying dad, who was battling skin cancer that had spread to his vital organs.

After a brave fight, Esad passed away in 2015 at the age of 62 - just months after Glory was stripped of its spot in the finals because of serious salary cap breaches.

If the Glory win Sunday's grand final at Optus Stadium, Djulbic will dedicate it to his dad.

"It would be massive to win it, because I know how proud and happy he would be," Djulbic said.

"He was a football fanatic. Even though he's not here, I'm sure he's watching from somewhere.

"He used to go to every game at Glory.

"When we knew he was ill, that's when I came back to Perth.

"That's when we had the salary cap breach but we had a good year (results wise) and he was happy.

"He passed just after the season. So he got a full season to watch before he passed."

Djulbic is now in his third stint at Glory, and praised coach Tony Popovic for helping rejuvenate his career.

The 36-year-old remains a fan favourite and said he gets goosebumps whenever the crowd unleashes their "Dino, Dino" chant.

"The fans see that I love the club and that I would do anything for the success," he said.

Djulbic came within centimetres of scoring in the semi-final win over Adelaide, with his thumping header cannoning into the crossbar before bouncing on the line.

If he gets on the scoresheet against Sydney in the grand final, you can bet there will be a proud father watching on from above. 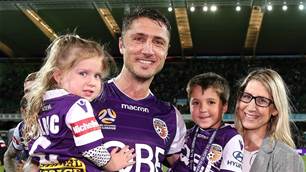