He's God to Liverpool fans but Robbie Fowler is just another rookie coach as far as Sydney FC boss Steve Corica is concerned.

The ex-England international faces his first game as Brisbane Roar coach against Corica's Sky Blues in an FFA Cup round of 32 tie at Leichhardt Oval tonight.

While Fowler holds a worldwide reputation following his celebrated playing career, the clash with Sydney will be his first competitive fixture as a full-time head coach.

"He was a very, very good player at Liverpool," Corica said of his opposite number.

"I know him, I've met him a couple of times when we played against each other when he was out here in Australia.

"I'm sure he's going to bring something different to Brisbane. He's a big name, which is great for the club as well and the A-League but it's not about him or me, it's about the two teams going on to the field." 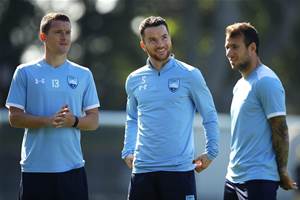 Sydney FC will be tested by God in the FFA Cup tomorrow night for Robbie Fowler's first competitive match as new Brisbane Roar coach...and the sky blues hit the training ground to prepare.

Both clubs go into tonight's clash with vastly differing records in the cup.

In the past four competitions they've been eliminated in the round of 32 by A-League opposition.

A-League champions Sydney, however, have never lost a round of 32 tie and reached the past three finals, winning the trophy in 2017.

"We want to win trophies. Every year is the same," Corica said when asked why his club did so well in the tournament.

"The cup's the same. We want to try and win it again this year.

"We got to the final last year, fell at the final hurdle but we want to go one better this year." 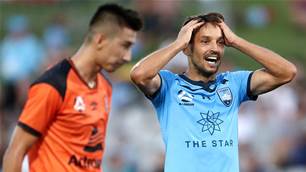