Craig Goodwin has revealed a desire to return to European football and test himself overseas again.

An impressive campaign with the Reds has seen him win a spot back in the Socceroos squad to face South Korea.

The winger has two years left to go on his contract with Adelaide, but admits the lure of going back to Europe remains strong.

"I’d definitely like to go back overseas again, but at the moment I am contracted with Adelaide United," the 27-year-old said.

"So my focus is with them, it’s been a good season with them. We’ll see what pops up in the future, I’m always open to different options. Having played in Europe for a couple of years I would like to go back there.

"But we’ll see what comes up. All I can focus on is what’s in the now, and for now is this game coming up and giving 100% and trying to prove to myself and the coaching staff here that I can be at this level consistently."

Goodwin ended his time in the Netherlands prematurely in May 2018 as he sought more regular game-time.

But the attacker has no regrets about his time in Europe or his decision to return home.

"You take the opportunities that arise for you in your career," he said. "Going to Holland after the two years with Adelaide was good timing and Europe is something I always wanted to challenge myself with and experience.

"Then you experience ups and downs and you just have to try and take things as they come, and find your best for, wherever you are.

"For me, with the two years I had in Europe, I felt the right thing was for me to come back to the A-League and try and have a good season again and try and out my face in the Socceroos set-up again.

"It’s gone to plan so far and now I’ve got the chance to stand out and get minutes in this game coming up."

Goodwin admits he was disappointed to miss out on the Asian Cup, but knows he has to perform consistently to remain in Socceroo calculations.

"I was involved in the camp in Brisbane just before the Asian Cup and I was obviously disappointed to miss out at the tournament," he said.

"But it’s just about concentrating on your club football and trying to put in good performances and be there consistently. It’s a challenge I’ve had probably throughout my whole career, to be in the national set-up consistently and it comes with good club performance.

"I’ve managed to have a good season this year with Adelaide and hopefully now I can stake my claim. I’m just excited for the game now." 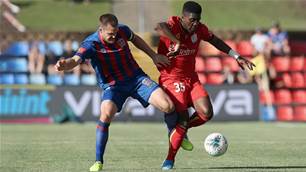 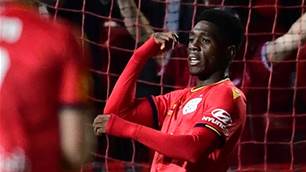