Sydney FC defender Rhyan Grant is hoping to be the solution to the Socceroos' right back dilemma.

In his four years in charge of the national team, Ange Postecoglou has trialled a number of players in that position.

Now Grant has received a call-up and the fullback is keen to take his chance in the next two World Cup qualifiers.

"There's been a few players to play right back in the last couple of years so if I can get my chance and hopefully do well..." he said.

Grant admitted he didn't expect to be selected for the Socceroos.

"There was a few people in the media talking about it but I didn't really take it too seriously I suppose," he said.

"The media can pump up players and put players down at different times so I didn't read too much into it.

"But when I was selected into the 30-man squad I started to think about it really seriously and then I was lucky enough to make the final cut.

"I'm just really excited to make it. I didn't think it would happen this year, but I'll just run with it. It feels really good.

"Everyone's been really welcoming. Obviously I already know a few of the staff and a few of the boys, but the ones I didn't all came up to me and said hello."

Grant, who has spent his whole career in the A-League with the Sky Blues, said his call-up has opened his eyes to the possibility of playing overseas and in a World Cup.

"It has actually, it's more come from outside people talking to me," the 26-year old said.

"I've always just played the game and tried to enjoy it in the A-League, I love it there. I've never really thought too much about further on.

"Obviously everyone has goals and whatnot, but being selected now opens my eyes up a little bit and I suppose it can enhance my goals in myself.

"Nothing too serious but opens my eyes up a little."

Grant has been watching the Socceroos from the outside and has been impressed by the transformation under Postecoglou.

"They've been doing well," he said.

"Ange's obviously a great coach and since he's come in I think Australian football's gone a long way. Hopefully we can continue that in the next couple of games and make sure we really come home strong. " 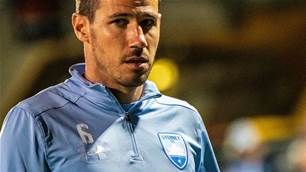