Sydney FC have flown below the radar this season but despite some tough performances, Grant believes they're currently the closest thing the A-League has to a title challenger.

The Sky Blues host Adelaide United this Friday night in what promises to be a resurgent encounter for both sides, which despite sitting second and fourth on the ladder respectively, will feel disappointed in their recent performances.

"We go into every game wanting to win," Grant said.

"We’re confident against any team in the A-League, but Adelaide in particular is always a fiery contest, so we’re really looking forward to it.

"We had a great turnout a couple of weeks ago and hopefully we get the same sort of thing, the crowd comes out in numbers and we get a good atmosphere for everyone."

It's been a strong debut campaign for Steve Corica, who faced an uphill challenge replacing Graham Arnold after losing star imports Bobo, Jordy Buijs and Adrian Mierzejewski, in addition the pace of winger Trent Buhagiar to an ACL injury during pre-season.

With foreign defender Jop van der Linden also suffering from a dip in form, Corica's ability to ensure his side stay solid defensively and win matches without dominating has impressed many fans and pundits alike. Especially in comparison to the media attention given to Melbourne Victory's stylish football and Perth Glory's runaway title challenge.

It's a run of form that Grant believes has enabled him to fluently gel back into Sydney's squad after returning from the Asian Cup, while also assisting additions such as Anthony Caceres to hit the ground running.

"It’s always great to get a win, but I think we played some very good football (against Wellington Phoenix) and everyone’s keen to get back out there on Friday night and put pressure on Perth," Grant said.

"We’re in the driver's seat at the minute, we haven’t had the best results at the moment but we’re confident of getting wins every week and seeing where we end up.

"I’ve been trying to score this season but I’m yet to get off the mark, I know it’s a cliché but if we can just get the win I’ll be stoked. The Aussie conditions are tough coming back from the Asian Cup but it’s been pretty cruisy coming back into a good team.

"(Anthony) Caceres is a gifted player, we’ve worked really well together. I think it’s good for my game to play with someone like him, so hopefully there’s a lot more to come." 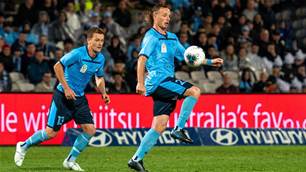 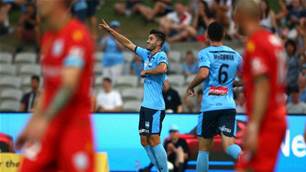