Hemed came off the bench to score with a second half penalty in Phoenix's 4-3 loss to Western Sydney Wanderers last Monday.

It was the Israeli international's first goal in eight games for Phoenix and with the monkey off his back, Talay expects to see a confidence boost from the ex-Premier League player.

Talay confirmed Hemed will start on Sunday when the Phoenix face Brisbane at Newcastle's McDonald Jones Stadium on Sunday.

"Very important for strikers to score goals. That would've taken a lot of load off him by scoring the penalty," Talay said.

"Strikers want to score goals and hopefully he will grow and he will build confidence.

"It's disappointing his (other) goal was disallowed for offside, he would've had two goals in that game. Hopefully that can build his momentum."

While Hemed has had a personal struggle to find the back of the net, Roar's woes in front of goal are more widespread.

After scoring 13 goals in a four-game winning streak earlier this season, Brisbane have managed just two goals and in a six-game winless run.

Last Sunday's 1-0 loss to Western United in Melbourne was another blank and with ex-Socceroo Scott McDonald still sidelined with a hamstring injury, Roar coach Warren Moon admits his team needs to rediscover their scoring touch quickly.

"The final third is obviously somewhere where we want to try and improve," Moon said.

"Our build up play and a lot of what we're doing right now is quite good, it's just putting it all together in the final third.

* Wellington have lost just one of their past six matches at Sunday's venue, Newcastle's McDonald Jones Stadium

* Phoenix captain Ulises Davila averages over three scoring chances created against the Roar, his highest creativity levels against any club. 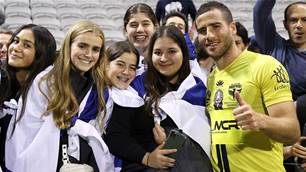