A fine performance by Australia was undone by technology, as they went down 2-1 to France in their opening World Cup clash.

Both goals conceded by the Socceroos wered decided by the video ref. In previous tournaments it’s highly unlikely that either goal would have been awarded.

Antoine Griezmann opened the scoring with a penalty (58') before Paul Pogba sealed the win (81') following an equaliser from the spot by Mile Jedinak (62').

Until France broke the deadlock it had been a tight game with Australia matching the World No.7 ranked team in all areas across the park.

The performance was exactly what had been promised beforehand, particularly from coach Bert van Marwijk, who had gone to lengths to explain the efforts that had been put in to the fitness of the players and the hard work on the organisation of the defence.

It had clearly paid off.

After a hectic first few minutes when they were put under considerable pressure Australia got into the match and showed a gritty, well organised, determined display. It was soon clear that there was not going to be a repeat of the 6-0 drubbiing they had received the last time the two sides met. 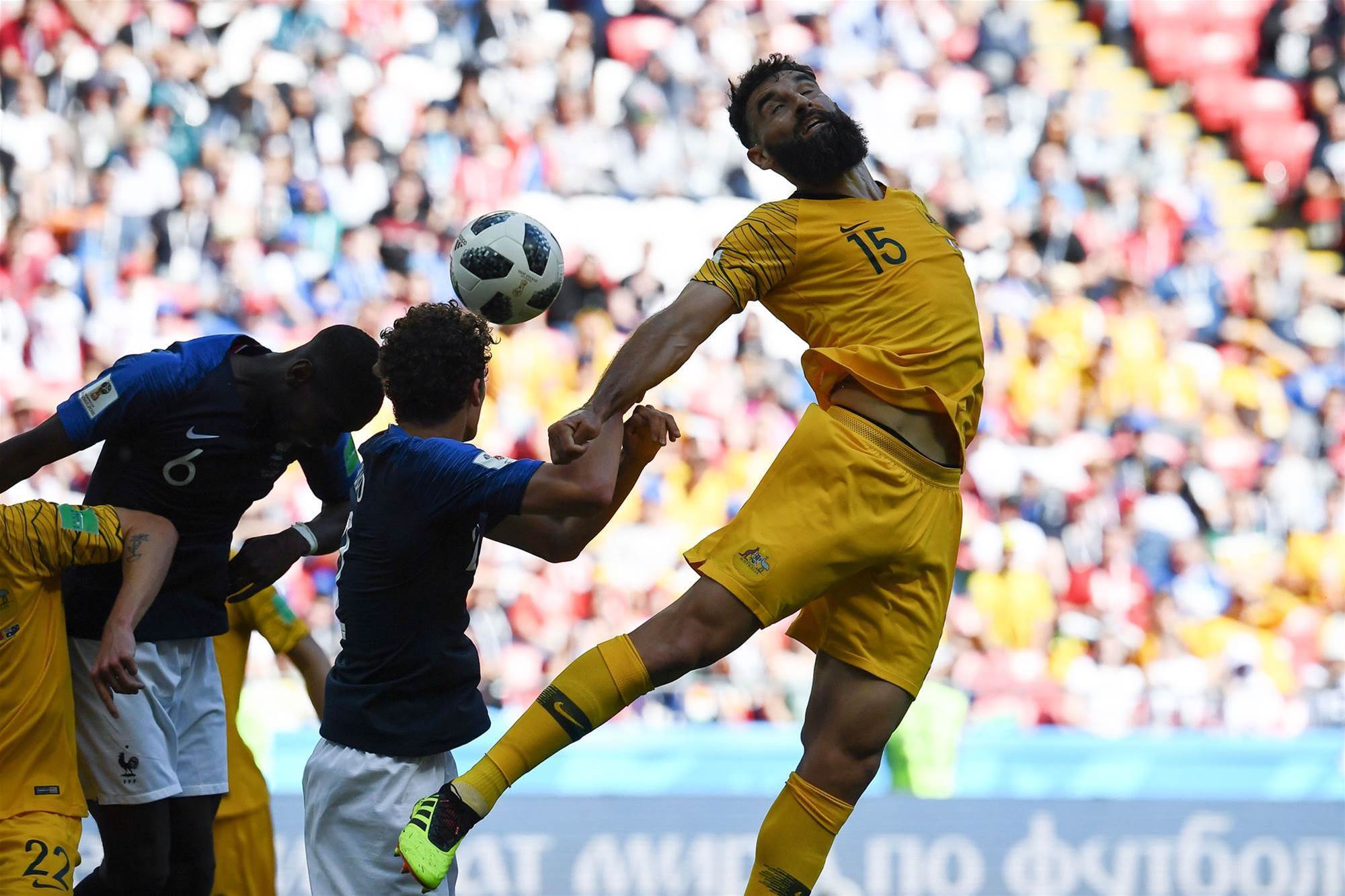 The first use of technology came in the moments before France went ahead in the 58th minute with the award of the first of two penalties.

It was highly contentious.

When Antoine Griezmann went down in the penalty area under a challenge from Josh Risdon it was the first time in international football the Video Assistant Referee was used to determine a decision.

Once the ball went out for a throw-in Uruguayan referee Andrés Cunha indicated that he wanted to check the decision and when he came away from the Referee Revew Area having checked the monitors he immediately awarded a penalty with replays still not appearing to make the call a clear-cut one.

Man of the match Antoine Griezmann took the spot kick himself putting it past Mat Ryan who barely moved.

Four minutes later and Australia was back in the game. A free kick from Aaron Mooy was needlessly handled by centre-back Samuel Umtiti and Mile Jedinak slotted the ball home with the same ease as Griezmann.

It was no less than Australia deserved following the contentious goal that they had conceded.

This lifted the confidence of the Green and Gold and they had their best period of the game moving the ball around and showing more enterprise. The large Australian travelling support was now right behind their side as they sensed an unexpected outcome. 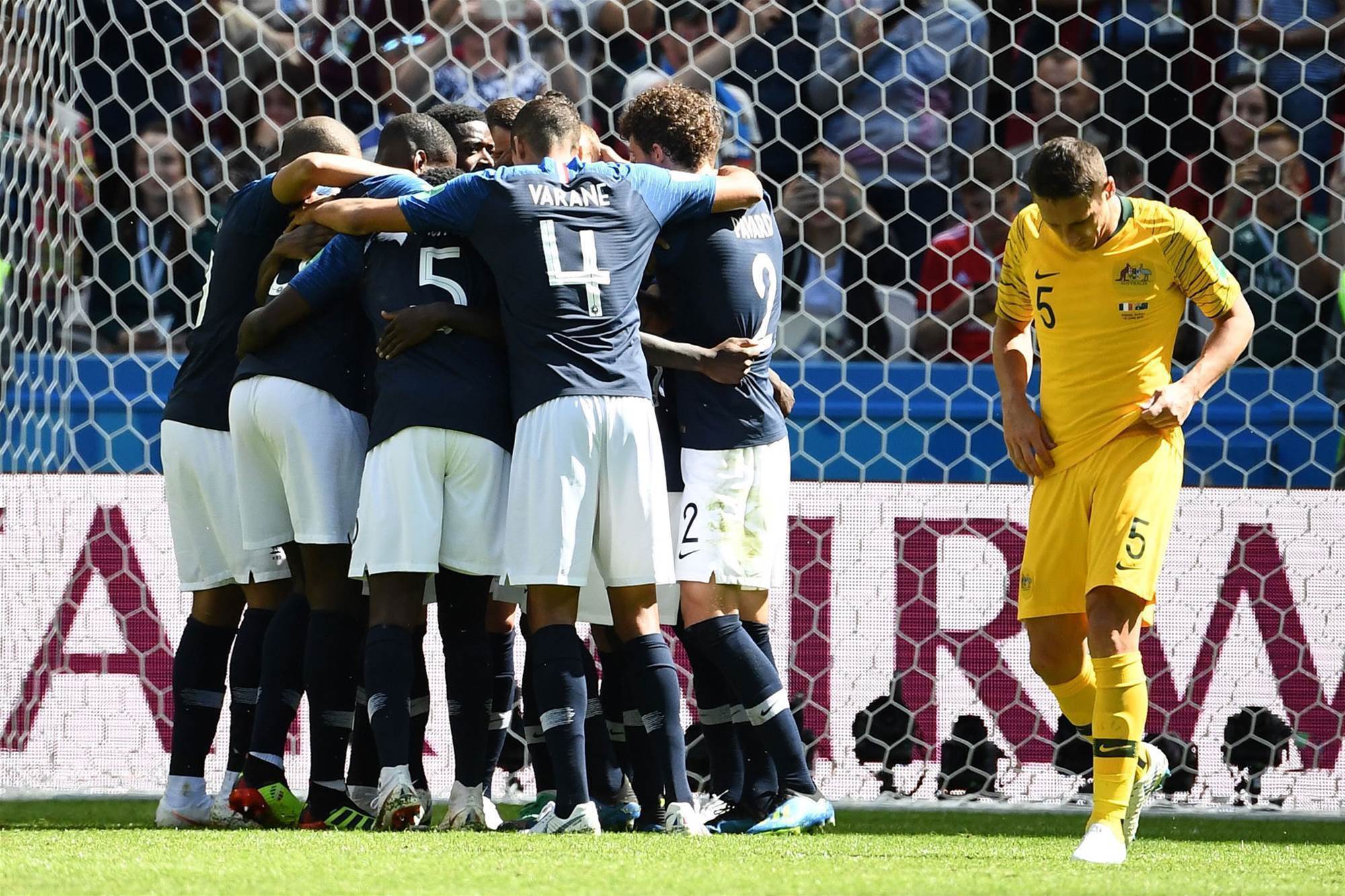 Unfortunately all the efforts were undone when the winner came in the 81st minute. The winner also had a large slice of luck to it. Olivier Giroud, sporting a headband following an injury sustained in France’s previous game, headed the ball down and Paul Pogba got his toe to it while being challenged by Aziz Behich.

The ball looped in the air and took the underside of the crossbar before bouncing back into play for Ryan to gather. Cunha once again turned to technology with the Goal Line Technology indicator on his watch showing that the ball had just crossed the line.

Although all of the defining moments came in the second half, the first half had also been a good contest.

France had started the match at full tilt and Australia was under pressure from the outset before their organisation and structure began to work and they gradually got back into the game to prevent the French attacks.

Mat Ryan had to be on his toes from the kick off as he was brought into action four times in the first eight minutes.

It was the first attack of the game that brought the best save out of the Brighton and Hove Albion goalkeeper who had to concede a corner at his near post to keep out the effort by Kylian Mbappé.

That was soon followed up by attempts by Paul Pogba from a free kick outside the area and a drive from Antoine Griezmann from a similar distance that required more action from Ryan.

The best effort of the half by either side came in the 18th minute from another free kick by Mooy, He found the head of Matthew Leckie and the ball was almost forced home by Trent Sainsbury with Hugo Lloris having to dive to turn the ball around the post.

That was the closest that Australia came to scoring in open play but their efforts in this match will be recognised around the world.

They almost pulled off an unexpected result against their lofty opponents and for their endeavour alone they probably deserved to take something out of the game.

Now they will face Denmark and Peru in their last two group games knowing that they have to come away with results but also knowing that with the set up that van Marwijk has put into place that they’re more than capable of achieving their aim of qualifying for the next stage.