Pressure continues to mount on Melbourne Victory coach Marco Kurz and Perth Glory counterpart Tony Popovic after their A-League sides slipped further down the ladder with losses in round seven.

Two of the top three clubs last season, Glory went down to Sydney FC 3-1 while Victory copped the same scoreline against Adelaide United.

Coaching against former club Adelaide for the first time, Kurz watched his side slide to a loss at Coopers Stadium, where he was once so admired.

Victory have one win from seven games and slumped to the bottom three after a third loss in their last four games.

"This can't continue, not for Melbourne Victory, if this continues, they won't even make the top six because that tonight was pathetic," former Socceroo Mark Bosnich said on Fox Sports.

Last season's Premiers Plate winners Perth have just one win from six and none from three at home, after falling to the Sky Blues in the grand final rematch at HBF Park.

Pressed further on whether he thought Melbourne's Denis Genreau dived, Babbel said: "You have two eyes. Do you understand the game a bit? F***ing have a look."

The penalty awarded by Chris Beath was the most controversial decision of the round, though Sydney benefited from two line-ball offside calls.

He reached the milestone in just 76 games, three faster than Shane Smeltz and Besart Berisha and had a second rubbed out by a marginal offside call.

Suspended Olyroos captain Riley McGree also bagged a double in Adelaide's win over Victory to give him six goals from as many games.

It was a successful end to a difficult week for McGree, who on Tuesday was suspended from internationals until April next year after an incident involving a Cambodian woman, while he was captaining Australia's under 23 side last March.

Victory captain Ola Toivonen scored for a fourth straight game and has netted all but two of his side's seven goals this season.

Coming off their worst start to any campaign with a solitary draw through five games, Wellington opened their win account with a 2-1 home victory over Brisbane. 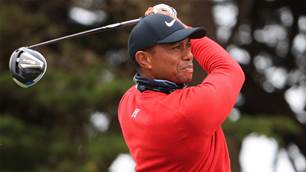