Amongst the golden generation of Australian road racers, Henk Vogels may never have enjoyed the profile of Stuart O’Grady or Robbie McEwen, but... 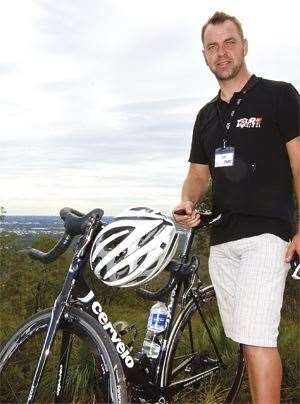 Amongst the golden generation of Australian road racers, Henk Vogels may never have enjoyed the profile of Stuart O’Grady or Robbie McEwen, but the muscular sprinter has seen it all when it comes to the bizarre microcosm that is the professional cycling tour. Born in Perth of Dutch stock, Vogels powered his way through the Australian ranks before heading to Europe in the mid-90s. There, he promptly proved his worth with strong lead-out work in the ’97 Tour de France and a pair of tenth-place finishes in the brutal Paris-Roubaix – “The Hell of the North”.

But Vogels’ career was never going to follow the beaten path. In 1999, wearing the green and gold bars of the Australian road race champion, he turned his back on the hectic schedules and heady atmosphere of the European tour, instead signing on with US outfit Mercury Cycling Team. After four years of consistent success in the States, his career took another swerve when he suffered a sickening crash in the Fitchburg Longsjo Classic, fracturing his neck and shattering his right ankle. After a year of recovery, he returned to Europe for a last blaze of glory with McEwen at Lotto, the pair combining for a string of stage victories at the Giro d’Italia.

Since retiring from the saddle in 2008, Vogels has tested his wares as a team director at Fly-V and a salesman at BikeSportz. More recently, he’s set up a cycling tour company, Vogels TS, while also lending his voice to SBS’ cycling coverage. Affable and earthy, this is a bloke who has truly examined the cycling enigma from every angle. With the 100th edition of the Tour de France casting a long shadow, we sat him down for a strong espresso and a good yarn ...

in one day. Never been done before ... Ever.

Your thoughts on the route?

Beth Mooney: The Master of Mackay