Sydney FC star Milos Ninkovic has burned Macarthur a second time after scoring against the A-League team he almost joined.

Macarthur coach Ante Milicic has lauded the class of would-be signing Milos Ninkovic after he burned the Bulls again, netting a vital goal for Sydney FC in their 3-0 win at Campbelltown Stadium.

Earlier in the week, Ninkovic admitted he'd been close to signing with the A-League's newest franchise at the end of 2019 after a meeting with Milicic.

He eventually re-signed with the Sky Blues instead.

And in a dramatic game in which there was an hour-long delay at halftime, Ninkovic reminded the Bulls just what they had missed out on.

"That was the one goal that disappointed me.

"Yes, he had quality, but to slice through us like that I thought we could have had a bit more contact there ... but in the end he's got that quality.

"His intelligence is at another level and then the players around him look even better.

In the 76th minute, the Sky Blues were leading 1-0 when Ninkovic slipped through the defence and slotted in what was effectively the deciding goal.

It capped off a rough night for the Bulls that started when they lost their skipper Mark Milligan to a red card in the 21st minute when he took down Trent Buhagiar with a wild kick.

Down to 10 men, the Bulls looked the better side for the first half as they went into the sheds 0-all.

Thunderstorms threatened to end the game at any point with significant lightning less than five kilometres away from the stadium.

However, the near-hour-long break at halftime was enough for the weather to ease.

Ninkovic's goal was bookended by a brace to lively teenager Patrick Wood in the first derby between the two Sydney sides.

The 18-year-old had been on the field just six minutes when he netted the first goal of his A-League career, cleaning up a deflection from keeper Adam Federici with a toe on the ball.

The goal reinvigorated the Sky Blues who looked oddly drained in the 66 minutes prior despite having an extra man on the field.

Wood's inclusion from the bench came as coach Steve Corica looked for an injection of energy and subbed off Buhagiar, Anthony Caceres and Luke Bratten.

He then iced the result in the 86th minute, taking advantage of some fancy footwork and a squared ball by Jordan Swibel in the box to shoot truly to the bottom right corner for his double.

"You've got to be in the right places, but I thought he did really well coming on," Corica said of Wood.

"He's very aggressive defensively, he makes some good runs and he can score."

Sydney will next play Wellington at Jubilee Stadium on Monday week, while the Bulls will host Western Sydney in Campbelltown on Saturday. 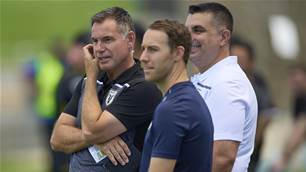 'We know we can do more' - Newcomers making a statement