Signed to a one-year deal, there was also a possibility that the German could follow his now-former captain Ola Toivonen and opt to return to Europe during the shutdown rather than extend his contract and see out the season.

But having made the decision to stay, the 35-year-old defender says he is fit, firing and ready to contribute to his club's run home.

“I think Europe was a little bit harder hit than here. Australia did it really good so far with the pandemic," he said. "My son went to school and all of this stuff, so we decided to stay here.

“I was fit before the pandemic, in the last weeks I made a couple of games. There’s always a bad feeling, a bad situation having had injuries.

“I haven’t gotten any injuries for the last four years before I came here. That’s the dark side of the game, injuries, and I did a lot of running and a lot of physical work in this break.

And the former Schalke and Fulham man says that, despite the challenges of his first season in Australia, he’s open to the possibility of extending his stay.

“We have to discuss a lot of things, with what’s going on in Germany, how it’s going here. So, again, a lot of uncertainty at the moment but I’m open to anything.” 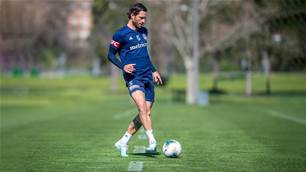