Mitchell – the WAIS product who drew the nation’s attention to gymnastics outside an Olympics for the first time in a long while. 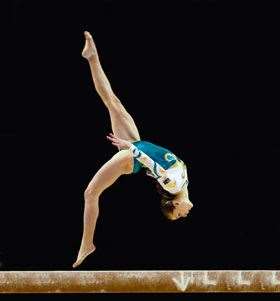 Mitchell – the WAIS product who drew the nation’s attention to gymnastics outside an Olympics for the first time in a long while. Her double silver at the World Artistic Gymnastics Championships in London on the floor and beam in October ranks with Monette Russo’s all-around bronze showing in Melbourne in ‘05, Philippe Rizzo’s high bar silver and gold in 2001 and ‘06 respectively and Prashanth Sellathurai’s ‘06 pommel silver.

Mitchell and Russo are the only women’s gymnasts to have captured individual medals at a World Champs for Australia. Sellathurai (pommel) also secured bronze at the London meet, giving us our best ever medal haul at a Worlds – hence the interruption to footy and cricket-dominated sports bulletins.

At Mitchell’s disposal is some of the best gymnastics tutelage an Aussie girl could hope to get her hands on in the form of personal coaches Nikolai Lapchine, Martine George and Tatiana Lapchina. Time will tell whether Mitchell will be able to propel Australia to the upper echelons of the Russian, US and Japan-dominated artistic world stage, but with the Toyota Cup in Japan this month, next year’s Pacific Rim Championships (Melbourne) and the 2010 Commonwealth Games and World Champs on her immediate agenda, expect to see plenty more column space and airtime dedicated to this determined little Sandgroper.

The Perth born and bred 18-year-old had a less conventional introduction to her beloved sport. “I used to do dancing. I remember having a gym bus party, which is where they take a double decker bus and rip out all the seats and insides and then fill it with gymnastics equipment. It was for my sixth birthday party. After that I decided I wanted to try gymnastics.”

Fast forward four years and we arrive at Mitchell’s father, Graeme, having to decide whether he’s going to pack the family up and move to Asia for work, spelling the end of ten-year-old Mitchell’s gymnastics future, or leave the family in Australia and only spend quality time with his flock during holidays.

“That situation carried on for eight years,” reports gymnastics commentary legend Liz Chetkovich. “Graeme only just moved back prior to the Beijing Games. He landed a job in Perth and the family’s been reunited. That’s family sacrifice. They spent eight years apart to give this girl an opportunity. There aren’t too many families who would do that.

“As time went by she got better and it became less likely they’d be able to join him. They were probably hoping Lauren was going to quit so they could all go and live overseas!”She didn’t quit - instead, growing into a skilful young master of her craft whose talents and work ethic led her to her first Australian Championships title this year following a World Cup final win on the beam in Madrid in ’08. That Mitchell fought back from a close fourth in the all-around final at London to secure her two silvers confirms what plenty say about her dogged determination, especially at an elite level. 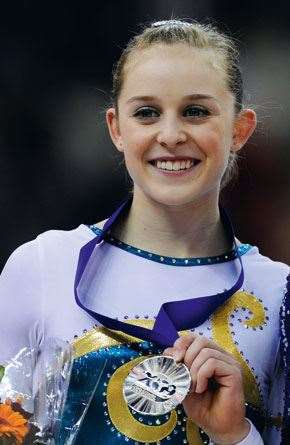 The silver medallist with the golden smile.
Images: Getty Images

“It’s always very hard to compare,” says Chetkovich. “She does look very similar to a lot of the Russian gymnasts from the former Russian Republic, though. I suppose we have a Russian coach here, as well as Australian coaches, but she does look a bit like an Eastern Bloc athlete. In fact, her mother Leanne is of Romanian descent, so she has some of that in her anyway, in genetics.

“She’s your classic-style gymnast. She’s not what you’d call a powerhouse. She has a great gymnastics body that’s very durable. She doesn’t tend to break down with big injuries or anything.”

What do they say?

“We think she’s capable of the ultimate, which is an Olympic gold medal. There’s a lot to do to get there. World Champs silver doesn’t always translate to gold, so she has to do a lot of things right in the next three years. We’re convinced she’s capable of mixing at that level.”

“We competed in the same arena for the World Championships that the athletes are going to be competing in at the London Olympics, so that was a great confidence booster. Obviously London’s the ultimate goal, but we have lots of little goals leading up to that.”