It promises to be a rugged time for the Asian champions, but in 17-year-old powerhouse Samantha Kerr, the Matildas look to have a truly world-class talent

It promises to be a rugged time for the Asian champions, but in 17-year-old powerhouse Samantha Kerr, the Matildas look to have a truly world-class talent. 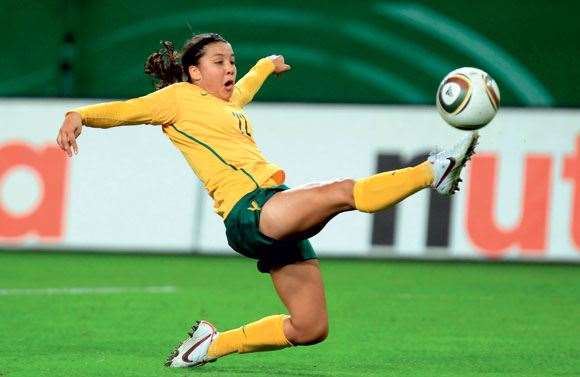 It’s a big year for the Matildas. With the FIFA Women’s World Cup looming in Germany in June, Australia will be stinging to step up, one eye fixed firmly on London 2012. Currently sitting 12th on the FIFA rankings – just one spot shy of our highest-ever ranking – Australia will face intense competition, with group matches against Brazil and Norway before a possible elimination round clash with reigning world champs and home-town faves Germany. It promises to be a rugged time for the Asian champions, but in 17-year-old powerhouse Samantha Kerr, the Matildas look to have a truly world-class talent

With a string of achievements under her belt – Women’s Under 20 Player of the Year, Goal of the Year and Players’ Player of the Year – it’s hard to believe that Samantha Kerr is only 17. However, age appears to be no handicap for the Perth local – success follows her irrespective of her slender years.

Kerr burst onto the national scene in 2009 as a prodigious 15-year-old striker and despite being the youngest member of the Matildas squad, promptly earnt a reputation as one of the most dynamic players in the group. But she’s taking it all in her stride: “I enjoy competing against the older girls. It’s a challenge, but I like it because the higher competitive level forces me to improve.”

This determined attitude coupled with her ability to create things upfront has seen Kerr rocket through the football ranks, winning the prestigious 2010 FFA Women’s Under 20 Player of the Year.In 2009, a goal and three assists for Perth Glory saw her awarded the W-League Players’ Player of the Year, while her spectacular long-range effort against Sydney FC in round eight took the league’s Goal of the Year.

Despite the list of accolades, Kerr rates her greatest achievement to date as the Matildas winning the AFC Asian Cup final last year – in which she scored the winning goal – which cemented their qualification for the World Cup. “It was more exciting for the team than anything else. Football’s a team sport, so in the end it doesn’t really matter who scores, as long as someone does!” she says.

Perhaps it’s this sense of selflessness and her incredible focus that have allowed Kerr to steer clear of the off-field controversies that have plagued the career of her brother, West Coast Eagles superstar Daniel Kerr. “At the moment

I’m just going to get as fit as I can for the World Cup. We have a great team so I’m confident we’ll do well.” 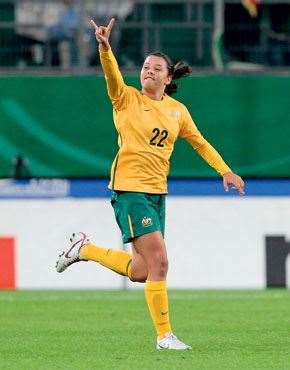 Football Australia describes Kerr as “an attacking, enthusiastic and fleet-footed player who’s one of the new breed of Matildas.” According to Matildas coach Tom Sermanni, Kerr looks set to be a future phenomenon. “She’s got pace ... and every W-League game I’ve seen her play in she made some kind of impact.”

John Gibson, Perth Glory W-League  head coach, says Kerr offers something different from a lot of other players: “She seems to be able to produce things out of nothing. She’s extremely unpredictable and uses this to create havoc.”

Kerr herself gets inspiration from watching her idols, Germany’s Alexandra Popp and Matildas team-mate Sarah Walsh. “My favourite player is Alexandra; she’s only 19 and when I watched her play she was sick [great],” she says.

While Gibson recognises Kerr still has a long way to go, he doesn’t baulk in his comparisons: “In ways she is very similar to Lionel Messi, especially how she dribbles the ball.” High praise indeed.

However, Kerr insists she doesn’t try to model her game on any particular player, but finds areas for improvement: “My first touch is pretty poor; I need to learn to control the ball before I start running. But I’m working on it.”

“Samantha Kerr is potentially a sensational talent. She doesn’t get fazed by who she plays against; she’s got pace

and really makes an impact in games. I think every W-League game I’ve seen her play in she’s made some kind of impact, whether she’s scored a goal, created a goal or caused problems for defences. She has terrific strength for someone so young.”

“She’s still very young and has a lot of development left in her, but she has a very, very, very bright future. If she wants to continue to learn she’ll go far.”

Fighting Matildas will bounce back: Raso