Which A-League teams are down with the kids? And who is best placed to play in the 2019/20 Y-League Grand Final? All that and more in the Round Eight Y-League Wrap.

“We used to play with young players in France,” Melbourne City Head Coach Mombaerts said on youth players last week. “But it’s a little bit different because they start to train earlier.

Ultimately, there are both a number of structural and philosophical reasons for the difference between Australia’s development and the rest of the world – why the Australian model can seemingly consider a player such as 22-year-old Josh Hope or 21-year-old Abraham Majok as as ‘young.’

Regardless, though, the best means of developing young players remains exposing them to playing time at the highest level possible, which, in Australia, is playing them in the A-League.

But when it comes to playing teenagers, which players are leading the pack in 2019/20?

For the purpose of this list, any player that was still a teenager when the season commenced on October 11 is eligible for inclusion in this list, meaning that players like Connor Metcalfe – born November 5, 1999 – are included but players like Walter Scott – born October 2, 1999 – are not.

Statistics have been sourced from Ultimate A-League.

Individually 19-year-old Liberato Cacace is leading the pack for the next generation - the Kiwi defender playing a total of 891 minutes so far in 2019/20.

For the Australians, the shining light is 18-year-old Louis D’Arrgio.

The Adelaide United midfielder has so far started all 10 games that he’s been in Gertjan Verbeek’s squad on his way to collecting a total of 877 minutes.

Spare a thought, though, for Wellington Phoenix’s 18-year-old midfielder Sam Sutton, who has logged a single minute thus far on the season.

Off the back of the sustained playing time given to D’Arrigo and Al Hassan Toure, the Reds have given the most minutes to teens across the league, with the pair combining with Lachlan Brook to play 1524 minutes.

The well-renowned academy of Western Sydney Wanderers has produced 1234 minutes of A-League action followed, thanks to Silvera and defender Lewis Miller, by Central Coast's 1075.

Bringing up the rear is Perth Glory’s 142 minutes that have been derived from the Popovic brothers. 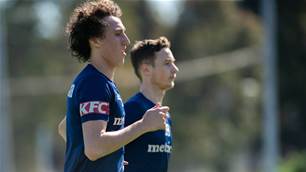