Western United were forced to play with 10 men for over an hour but held on for a point in a goalless draw with Adelaide United on Friday.

Western United have held on with only 10 men for over an hour to share the points in a goalless draw with Adelaide United at Coopers Stadium on Friday night.

The visitors were up against it when Victor Sanchez was expelled just after the half hour for a second yellow card but were dogged and had late chances to snatch an unlikely win.

Adelaide also had a player sent off in the closing minutes when substitute Mohamed Toure picked up his second yellow card.

"What an effort from my players and my football club," he said.

"I could not be prouder."

Reds coach Carl Veart felt his side did not deserve to win.

"You would say it's two points dropped when you play against 10 men for half a game," he said.

"But we weren't good enough and you can say it's almost a point we were lucky to get."

The visitors thought they had taken the lead just after the quarter hour following an Alessandro Diamanti free kick.

The Italian whipped a ball into the box which was met by Tomi Uskok but the contact was off target and rolled across the face of goal leaving Besart Berisha with an easy tap in.

However, the goal was ruled out by referee Chris Beath who determined the ball had struck the arm of Uskok.

Adelaide attacked the visitors' goal but failed to carve out any clear-cut chances, while Diamanti regularly dropped balls in behind the Reds defence for Dylan Pierias with pin-point precision, however the winger was also unable to fashion a clear opportunity.

The game kicked up a notch on 35 minutes when Sanchez was sent off for a second bookable offence.

The Spaniard ran through the back of Louis D'Arrigo after he had released the ball, picking up his second yellow card following a challenge on Ben Halloran earlier in the half.

The Reds' purpose was clear after the interval and they spent most of the half camped in Western United's defence.

Adelaide bossed possession and moved the ball around from side to side, but the visitors' defence was resolute, rarely allowing the home side to find a way through.

Stefan Mauk shot wide from close range after receiving the ball from Halloran before substitute Kusini Yengi forced a stunning save from Ryan Scott in Western's goal just after the hour.

On 78 minutes the visitors thought they had stolen an unlikely goal when Diamanti held off Elsey and looped a ball over the Adelaide defence for Pierias who rounded Reds keeper Joe Gauci and rolled the ball into an empty net.

The goal was eventually overturned for offside with replays suggesting it was a matter of centimetres.

Western had another glorious chance to snatch a winner with Aaron Calver heading Diamanti's cross wide from inside the six yard area. 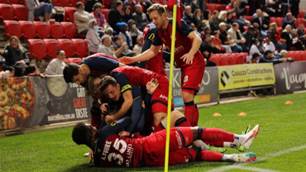 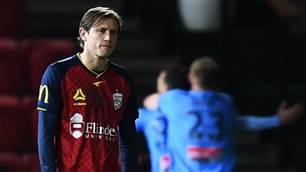 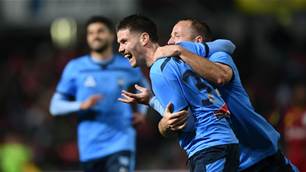