It wasn't pretty but a sixth-minute goal was enough for Sydney to move to second in the A-League after their win over Melbourne Victory.

The Big Blue turned into a surprisingly big scrap as Sydney FC had to dig in to defeat a plucky Melbourne Victory 1-0 in their A-League clash at Netstrata Jubilee Stadium.

Defending champions Sydney were fancied to put a score on the struggling visitors, who sacked coach Grant Brebner after a 7-0 thumping by Melbourne City less than two weeks ago.

But their gutsy last-up win against Western Sydney seemed like more of a marker for Victory on Tuesday night as they pushed the Sky Blues all the way.

A big whitewash had looked on the cards early.

It took only six minutes for Sydney to open up the scoring when Luke Brattan delivered to the far post for Bobo to comfortably beat 'keeper Matthew Acton.

Veteran Victory defender Leigh Broxham, who has appeared in a record 43 'Big Blue' encounters between the teams, was guilty as anyone for failing to mark up.

But the Victory's defence tightened up thereafter and, despite some bankable chances, Sydney couldn't break through again.

Kosta Barbarouses had two efforts saved before the break for Sydney while Lleyton Brooks looked dangerous with a superb assist and then snappy shot on the diagonal for the Victory.

Brooks was at it again with a searing header that struck the outside of the post in the 52nd minute, but from there it was largely one-way traffic as Barbarouses and replacement Milos Ninkovic had a bag of chances that failed to end in goals.

Acton was superb in goal for the visitors, pulling off superb back-to-back saves from Barbarouses and Ryan McGowan, the first from a lofted kick and the second from a well-directed header even better.

"He's made big saves at big times to keep us in the game.

"And that's another message we've said - stay in the game, you never know, you could get something in the end."

Sydney coach Steve Corica, who felt his side had played better in their preceding three consecutive draws, couldn't muster up much sympathy for Victory who fell to their seventh straight loss to the Sky Blues.

"I don't feel sorry for them - I just want our club to keep winning," he said.

While the goals haven't exactly flowed for Sydney FC, the addition of striker Adam Le Fondre up front after he completes his quarantine period on May 7, will give them the opportunity to put more polish on their finishing.

The win moved Sydney into second on 31 points while Victory (14 points) stay in 11th, one point ahead of Newcastle. 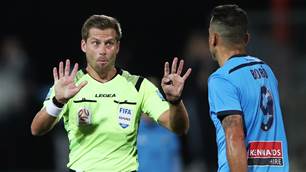